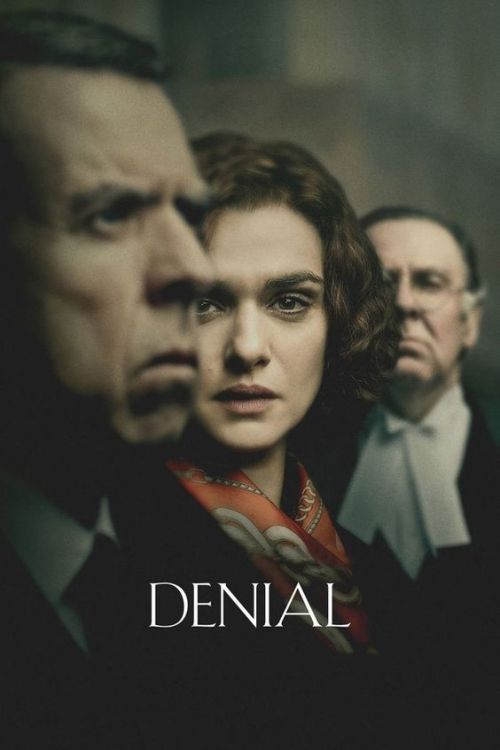 If 2016 determined anything, it was that we now live in a Post-Truth era. In such an era, facts do not matter since there are ‘alternative facts’ that just have to sound real to be true. Yet, does that mean there are no incontrovertible facts at all? What about the existence of gravity, or that the Earth is round, or whether Henry VIII had six wives, or whether the Holocaust happened? In 2000, the High Court of England determined at least one of these facts. Director Mike Jackson’s Denial brings the libel case that the antisemitic, Neo-Nazi propagandist David Irving brought and lost against the American academic, Deborah Lipstadt, to the big screen. 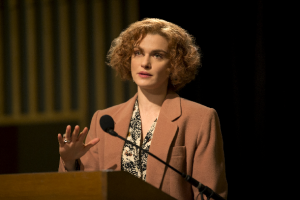 Deborah Lipstadt (Rachel Weisz) addressing students on Holocaust denial in 1994, where she ass that David Irving is a liar.

Denial is based on the case and the book, History On Trial, by Deborah Lipstadt. The film opens pretty much with the scene in the trailer where Deborah (Rachel Weisz) is addressing students about the Holocaust in 1994. No sooner does she say that David Irving is a liar and that she will never debate with Holocaust deniers, when Irving (Timothy Spall) stands up and mocks her. Deborah refuses to speak with him or deny her accusation. Subsequently, Irving takes legal action against her. Deborah responds by getting together a legal team, consisting predominantly of barrister Richard Rampton (Tom Wilkinson) and solicitor Anthony Julius (Andrew Scott), and they set about uncovering Irving’s ‘facts’ for the lies they are.

Denial is a slick legal thriller. It goes through the different stages of the case very well, so that viewers understand the sheer amount of work the lawyers had to do at the pre-trial stages and during the trial itself. The movie shows all of this with efficiency, particularly from Lipstadt’s side; Irving’s less so, but that is because he did not have a lawyer to represent him in court. (Irving claimed that no-one could represent him better than himself. Lipstadt and her legal team believed that he could not afford the legal fees.) 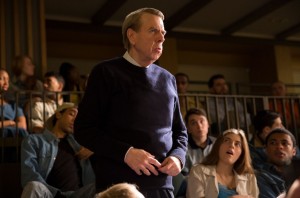 David Irving (Timothy Spall) stands up to Deborah’s accusation and urges her to argue with him on the ‘facts’ that the Holocaust did not happen.

Irving is portrayed with relish by Timothy Spall as a vain, headline grabbing, publicity-seeker. At times, it is almost comical watching him pander to the cameras (or the cameras to him). Yet, at other times, one just wants to ask him: don’t you realise how stupid you are going to look at the end of this? And this is not just because we know he is going to lose the case. It is because, as is typical with bigots, antisemitic or otherwise, they let their prejudices distort their realities to the point where the differences between black and white, night and day, and fire and ice no longer exist. Regardless, Spall makes Irving entertaining to watch, which is quite an achievement since the man is a Hitler lover.

Irving’s opponents are played well too. Rachel Weisz turns in a (very) strong New York accent and portrays Lipstadt as passionate and uncompromising in her belief to take down an odious Holocaust denier. Andrew Scott illustrates Anthony Julius aptly as a cold and pugnacious borderline sociopath. And Tom Wilkinson does a good job as Richard Rampton, showing him to have a soul to go with his professional façade.

Denial is driven by its protagonists. It is just as well too, as the film does not have much else going for it. For one, one feels no tension as the case builds up to its verdict. Considering the protagonists keep stressing how massive the case is and that it will determine if the Holocaust happened (as absurd as that sounds), it is startling that one feels nothing. And before one argues that it is impossible to feel anything as viewers know the outcome before going into Denial, let us remind ourselves that we felt euphoric after King George VI gave his speech in The King’s Speech; that we felt endangered when Batman and Bane first went to blows in The Dark Knight Rises; and that we felt heart-broken when Alice gained Early-Onset Alzheimer’s in Still Alice, despite knowing what would happen by the end in those movies. This indicates that director Mike Jackson’s sense of timing needs improvement. 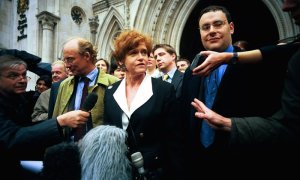 The real Deborah Lipstadt with her legal team, back in 2000, after her victory.

Second, the film misses out a noteworthy (and hilarious) moment in the case, which is astonishing. And, three, Howard Shore’s music score is hugely disappointing. Like the film, his score becomes mawkish and sentimental when it needs to crank up the tension. For a man who once wrote the wondrous, engrossing music for The Lord of the Rings, one knows he can do better. Indeed, one knows that courtroom drama can be done better. Watch the recent National Treasure, starring Robbie Coltrane.

All-in-all, Denial is a nicely put together legal thriller. It has a good cast that perform well and it does a decent job at portraying the case that David Irving brought against Deborah Lipstadt. More significantly, though, the movie forensically examines the evidence we have to prove that the Holocaust happened and surgically debunks Holocaust denial. Thus, like gravity, like the Earth is round, and like Henry VIII having six wives, the Holocaust’s occurrence as a historical fact is incontestable. Bearing in mind the era we live in currently, that is vital.

Posted in Based on Real Events, Book based, legal