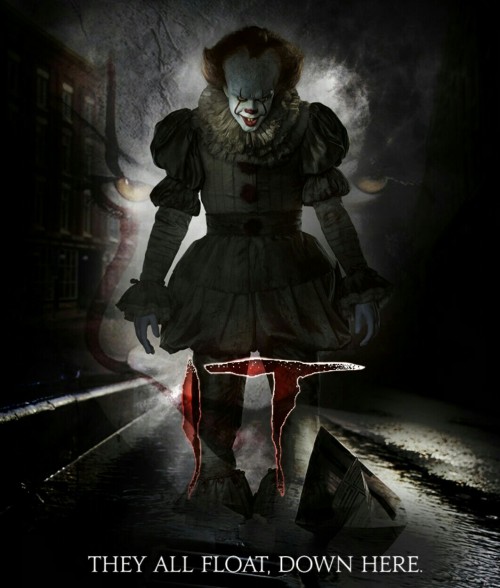 Stephen King is a prolific author. To date, he has written 54 novels and over 200 short stories, many of which have been adapted for the screen. Predominantly, King has specialised in the horror genre, as The Shining, Misery and Salem’s Lot (to name but three) attest. Nevertheless, throughout his novels, King’s stories lose their horror. It is another example of this. Why is that?

Bill (Jaeden Lieberher, right) hands his brother, Georgie (Jackson Robert Scott, left), a boat that he has made for him. It will be the last time Bill sees his brother.

It: Part One is about Pennywise the Clown (Bill Skarsgard), who hides in the drains of Derry, a small town in Middle America, and kidnaps children. One day, a young boy called Georgie (Jackson Robert Scott) goes missing. This leads his brother, Bill (Jaeden Lieberher), to round up his friends to find out what happened.

It has a very disturbing premise and the opening sequence holds true to that. But it does not take long for the disturbing elements of the movie to lose their scariness. In his book, On Writing, Stephen King stresses the importance of ‘situation’ in his stories; for example, what if vampires invaded a small village in New England (Salem’s Lot)? Or what if someone wakes up after a car accident to find himself/herself tied to a bed and being cared for by a psycho in the middle of nowhere (Misery)? These are terrifying premises. However, after a while, the audience become immune to the horror. The same is true for It. Very soon into the film’s (bloated) 135-minute run time the clown/It no longer seems as scary as he did at the start.

It does not help that Pennywise becomes silly and comical as the movie wears on. Indeed, this is symptomatic of It as a whole. The movie’s tone is inconsistent. It wants to be scary, but seemingly every time the film tries to be scary one of the characters throws in a joke. This ruins any chance of tension, which is essential for audiences to feel fear.

Bill (centre), with his group of friends, looking through reels of films on a projector. What they see, horrifies them.

Then again, even if the characters did not make jokes at the wrong times, viewers still would not have got the chance to feel afraid due to Benjamin Wallfisch’s score. It is so overbearing and it rams down one’s throat what director Andy Muschietti wants one to feel. No doubt, he wants his audience to feel scared. But this is not the way to do it. He should have created situations for the characters wherein one feels that they are in danger. This would have induced fear naturally into viewers. Then, the music would have enhanced the fear. But when there is nothing to be scared of, viewers cannot feel afraid. Music (however loud) cannot change that.

It has many problems. Yet, that is not to say that it has no redeeming features either. One, the late-1980s setting of this small, Middle American town is authentic. King writes a lot about Middle America in his books and It captures the spirit of his work in its aesthetics.

Two, some elements of the horror in the film are genuinely unnerving. Alas, these have nothing to do with Pennywise/It. Still, though, they are unsettling. Muschietti should have combined these with the (supposed) horrors of Pennywise/It. Then, the film would have been chilling.

Pennywise the Clown/It (Bill Skarsgard) ready to bounce on his next victim with a red balloon.

And, three, the acting is decent. The acting is done in the main by child-actors and Bill Skarsgard, and they do their best with the (limited) script that they have been given. But they cannot save the film. The dialogue, the plot and the film’s sense of timing are too poor for that.

All-in-all, It: Part One is a disappointing movie. The film has its qualities, not least in its terrifying premise. But, like in so many of Stephen King’s stories, It cannot maintain the terror of its premise throughout the duration of the movie. The film becomes laughable long before the end. That there are more funny jokes in It than sensations of fear underline that the movie is not scary enough.

Posted in Book based, Horror