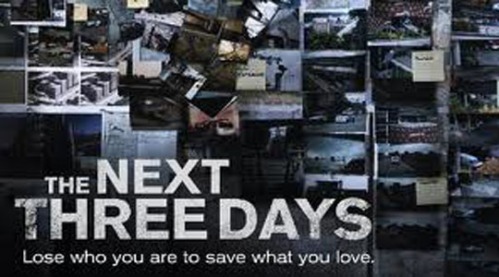 I’ve heard that some men will die (or kill) for their woman (metaphorically, at least). However, I’ve never heard anyone say that they’ll study every weakness in the government’s prison system in order to get their lover out of jail. There is probably a reason for it and The Next Three Days illustrates why this might be the case. 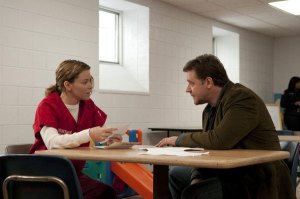 John, being a good husband, visits his wife in prison.

Early on in the film, Lara (Elizabeth Banks – Zack and Miri make a Porno, Spiderman I–III), is arrested by the police and sentenced to jail for life for murdering her boss. This leaves John (Russell Crowe – Gladiator, A Beautiful Mind, Les Misérables), her husband and philosophy teacher/lecturer, to look after their son, Luke. Convinced that his wife is innocent, John seeks the advice of Damon (Liam Neeson – Schindler’s List, Star Wars I, Unknown), a man who has escaped from prison a staggering seven times, to find out a way of getting Lara out illegally. John learns from Damon what he must do to free her and how difficult it will be to beat the counter-measures the state-police have in place to stop escapees from running beyond their reach. For three years, John plans every step and waits for the right moment to strike.

Whilst perhaps a little far-fetched for it to be realistic, the plot makes for The Next Three Days to be full of pulsating tension. Yet, it fails to deliver on this for much of the movie. Part of this is because the fast-beating music is inadequate and, mostly, incorrectly timed. Additionally, the film is too long. There is no need for it to last two hours and twenty minutes. If it would have been half an hour shorter, it would have made for a much better film as only the last forty-five minutes is particularly interesting. 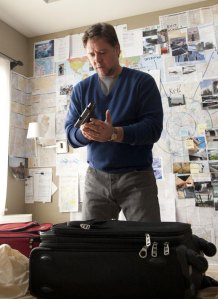 The plans are complete and John, loading up his James Bond-like pistol, is ready to put them into effect to save his wife from a life-time behind bars.

The storyline has its exciting moments; but there are many holes in it. One cannot help but ask oneself why John’s work as a teacher is not affected by his excessive (or, rather, obsessive) workings at day and night? Or why no-one notices his plans to free his wife from prison which are on a wall in a room in his house? Or why John never questions his own sanity? Also, escaping is not an end in of itself. One still has to go with mundane, daily chores after escaping. But, unfortunately, the director, Paul Haggis (Million Dollar Baby, Casino Royale, The Quantum of Solace), does not deal with these issues.

Despite the gaps in the plot, the actors do not do their credentials harm. Indeed, the acting is consistently average throughout the movie: neither especially bad nor great. Nor are they ever tested, which is a bit of a shame because it could have added another dimension (and possibly a realistic element) to the storyline. Instead, we have to watch Russell Crowe kill the dregs of society to give the film some (cheesy) action in a vain attempt for entertainment.

Thus, all in all, The Next Three Days is a disappointment. Whilst, at first glance, the film may look thrilling, if unoriginal (after-all, how many times have we seen a movie about a prison breakout?); it is not as fascinating as it should have been. It might also explain why there is no colloquial expression for someone to free another person from jail. It is far simpler just to say you’ll die (or kill) for them.