In my review of last year’s Trance, I wrote about how psychological thrillers mess with the mind and how they tend to be enjoyable and very intense, with semi-plausible plot twists that keep audiences guessing long after the conclusion of the film. Before I Go To Sleep is more of the same and a credit to the genre. 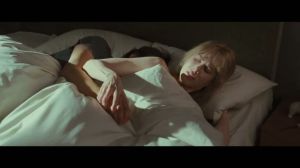 Christine (Nicole Kidman) wakes up, as she does every morning, not knowing who she is or her husband, Ben (Colin Firth), sleeping next to her.

Before I Go To Sleep is based on the 2011 novel with the same title by SJ Watson. The film centres round Christine (Nicole Kidman), an amnesiac unable to remember a thing from one day to the next, to the despondency of her husband, Ben (Colin Firth). Dr Nash (Mark Strong) calls Christine every morning to make her watch a video recording of herself from the previous day. This way Christine can remind herself of what she did the previous day in an attempt to cure herself of her amnesia and, more importantly, so that she can figure out/remember the truth about the incident that gave her amnesia.

Before I Go To Sleep is an intense and entertaining film. It is not as complex as Trance, but Before I Go To Sleep still holds audience’s attention with great success throughout its relatively short, 92-minute running time. What makes the movie so absorbing is the way the film slowly (and deliberately) dangles carrots of information to viewers, so that they naturally form conclusions in their heads as to how Christine became an amnesiac. This adds to the thrill of the story and guarantees that when the twist comes, it is a genuine surprise in a good way.

Christine having a meeting with Dr Nash (Mark Strong), without Ben’s knowledge or consent.

However, whether the twist makes plausible sense upon looking back on the film is highly questionable. One of the problems with the twist is that viewers are not given a crucial piece of information midway through the film. While it is common in psychological thrillers not to reveal vital pieces of information about events prior to the starting point of the film (timeline-wise) until the final revelation, it is another thing entirely for information to be (cynically and sinfully) withheld from viewers from the start of the movie’s timeline. This feels like the director has cheated on his audience and not in a good way.

Putting the plot twist aside, the dialogue throughout the film has been well written and the acting is decent, without being outstanding. Nicole Kidman plays believably as the anxious and emotionally distraught central character. She looks the part: gaunt, skinny, vulnerable and confused. More could time been devoted to her backstory, but that is not the real issue with Kidman’s performance. The real issue is that her performance carries the odour from her last film: the ill-fated The Grace of Monaco. With this mephitic whiff emanating from Kidman, it is hard to watch her in Before I Go To Sleep without feeling that her career has fallen and that she is trying (hard) to get herself back on track again.

The same odour, however, does not affect from the performances of the two main members of the supporting cast. Both Colin Firth and Mark Strong do good jobs with the material that they are given. If anything, the material and screen-time that they are given lets them down. Neither Firth nor Strong are given enough time on screen and the movie does not explore their personalities and their motives deeply enough.

Christine watching and recording herself in secret to try and remind herself who she is and what did the previous day.

Apart from the acting, Ed Shearmur’s score is not outstanding but it is atmospheric and unsettling. This helps to mess with one’s mind and helps to make Before I Go To Sleep a good film and a worthwhile addition to its genre.

All-in-all, Before I Go To Sleep is a thoroughly enjoyable and intense psychological thriller. It has a much simpler plot than other films in its genre, but that is not to the movie’s detriment due to the force of the storyline, the dialogue and the acting. Before I Go To Sleep’s plot twist is suspect, yet it will certainly take viewers by surprise and, therefore, like Trance, will keep audiences thinking long after the film has finished.