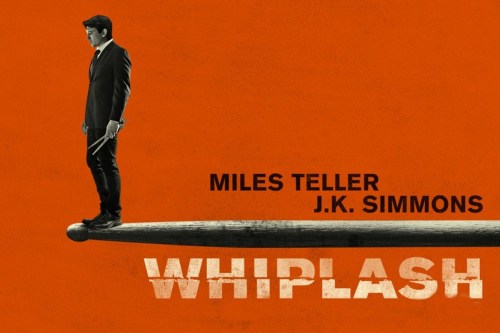 When one sees artistic greatness, whether it is in drawings, music, film, theatre, sport or otherwise, it is natural to gawp and marvel. Great artists, irrespective of their medium, always have stood and always will stand head and shoulders above their competitors. But what does it take to be an artistic great? How does one become a great in their respective field? Whiplash, Damien Chazelle’s absolutely brilliant film, may answer those questions. 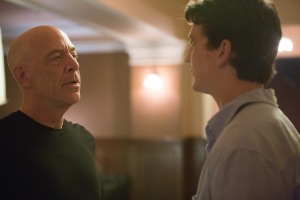 Andrew (Miles Teller) looking and listening to his mentor, the conductor Terence Fletcher (JK Simmons) as Fetcher gives him some advice.

Whiplash is a drama, centred completely round Andrew (Miles Teller), a nineteen year old jazz-drummer who goes to Shaffer Conservatory, the best music school in America. There, he comes under the tutorship of conductor Terence Fletcher (JK Simmons), who pushes him hard, first, to enable Andrew to enter into his band, wherein they play a piece called ‘Whiplash’; and, second, in his attempts to make Andrew an artistic great.

Whiplash is an entertaining and pulsating film, with some exceptional performances. In an interview, Miles Teller spoke about the energy coming off the screen throughout the movie. And he’s right, although he also modestly downplayed his own role in making Whiplash come alive because Teller is superb as Andrew.

Samuel Delaney in About Writing explains that for one to achieve artistic excellence one must (metaphorically) punish oneself, make sacrifices, and suffer. In Whiplash, viewers witness Andrew punish himself, make sacrifices, and suffer as he pushes himself to breaking point to have a chance at becoming a great drummer. Better still, though, viewers feel Andrew’s agony as well as the sweat and blood dripping off him. It may have helped Teller that Whiplash was shot over nineteen (uber-intense) days, with him working eighteen to twenty hours under the camera’s gaze. When Andrew is exhausted and feeling the pressure it is probably genuine. At the same time, the intensity of the filming schedule could have hindered Teller. So, it is to Teller’s credit that he is able to perform to such a high standard under exhausting circumstances. He deserves his BAFTA nomination in the Rising Star category as, in part, he provides the energy that radiates from the screen during Whiplash. 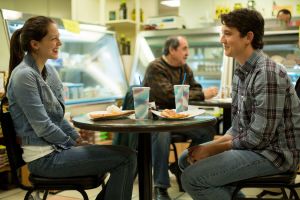 Andrew taking out Nicole (Melissa Benoist), and they discuss their respective ambitions in life

Yet, as good as Teller is, it is his character’s mentor who steals the limelight. JK Simmons is terrific as Terence Fletcher and it is no surprise that Simmons has been Oscar nominated for his performance as Fletcher. Fletcher is intelligent and passionate, yet he is also manipulative, nasty, vicious and utterly ruthless. When he walks into a room, one senses the fear he induces into his students. But is Fletcher a sadistic prick and a bully? Or is he a good mentor and an effective motivator? It would be easy to answer in the former. But Niccolo Machiavelli writes in The Prince that it is better for a leader to be feared than loved because fear forces people to go the extra mile when they wouldn’t otherwise. Additionally, one could believe that the motivational methods of Sir Alex Ferguson, the former Manager of Manchester United Football Club (MUFC), were not always too dissimilar to Fletcher’s, and the success Sir Alex achieved at MUFC between 1986-2013 was extraordinary. Therefore, one should bear in mind the writings of Machiavelli and the feats of Sir Alex before criticising Fletcher. There is logic behind his methods.

However, whatever one may think of Fletcher and his methods, it is worth noting that audiences only see him through Andrew’s eyes. In an interview, Simmons said that there were some scenes of Fletcher filmed without Andrew present. These (apparently) would have given audiences another perspective on Fletcher’s personality, but the scenes were cut from the movie so as to preserve Whiplash as solely Andrew’s story. Simmons suggests that the lack of these scenes does not detract from the film and even enhances it. This probably means that the scenes would not have significantly altered our understanding of Fletcher, so instead of wondering what these scenes beheld we should commend Damien Chazelle for having the resolve to take them out of the final cut of the movie.

The price Andrew pays in his attempts to make it to being a drummer of noteworthy repute: sweat and blood.

Nevertheless, it is not just for taking those scenes out that Chazelle should be commended. He should also be applauded for writing vivid dialogue and for giving the actors room to improvise in scenes to make the scenes more realistic. Similarly, Justin Hurwitz should be clapped for writing some wonderful music that builds on the tension that Andrew (and the audience) endures in Andrew’s attempts to reach the dizzying heights of artistic greatness.

All-in-all, Whiplash is a flawless and exhilarating film, with two phenomenal stand-out performers. On the surface, the movie is about the relationship between a pupil and his mentor, seen exclusively from the pupil’s angle. Yet, Whiplash has a deeper layer. It illustrates the level of dedication and self-torture one must go through to become a great in one’s artistic field and the type of mentor that may be required to attain artistic superiority over one’s rivals.