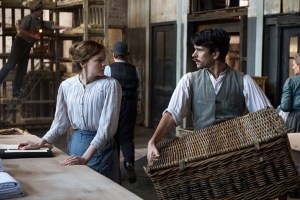 At the turn of the twentieth-century, most men could vote in the UK but women could not. Rightly, this caused tension and gave rise to the Suffragette movement, headed by Emmeline Pankhurst. The Suffragettes used ‘direct action’ to bring attention to the injustice of women being unable to vote. Suffragette focuses on this movement, and the consequences these women suffered to bring the injustice of women being denied the right to vote to the forefront of the world’s attention. But, sadly, none of it is done particularly well.

Suffragette is set in London between 1912-13. It is based around real events but our protagonist, Maud Watts (Carey Mulligan), is fictional. Maud works in a laundry factory, struggling to make ends meet. Appalled at the working conditions and the treatment of women by her boss, Norman Taylor (Geoff Bell), Maud joins the Suffragettes and gradually becomes more and more involved in the movement, despite the consequences of doing so.

Suffragette is a surprisingly bland and uninteresting film. The movie starts off with a funereal drum beat, plus some misogynistic quotes from British politicians taken out of context. This sets the tone for a highly unsophisticated, puerile and uneventful outlook of the era and the movement. Alas, the film does not improve as it goes on. Worse, the film becomes sterile, making its 106-minute run time seem considerably longer.

For all the film’s sterility, Suffragette grapples well (and not so well) with some of the issues plaguing the era. The film successfully shows us that conditions in factories were horrible back then; that people were much more patriotic back then toward the monarchy and the country compared to nowadays; that women, their offspring and their properties were controlled by their (abusive) husbands; that the Suffragettes adopted dubious, violent, and borderline-terrorist methods to get their message heard; and that the Suffragettes were treated harshly in prison. This gives us some insight into the mindset and workings of pre-World War I British society, which is interesting.

But, alas, all of the above is tackled only at a shallow level in the film. Moreover, by the end of Suffragette, one learns little else about the era, other than that all the men were ignorant, misogynistic, lying, woman-beaters, and that all the women were heroines monolithically united in their struggle to get the vote. This is woefully unrepresentative of the era and unacceptably simplistic. If anything, this tells us more about script-writer Abi Morgan than about the era she wishes to portray. It is almost as if Morgan is more interested in imposing her opinions (propaganda) upon her audiences than portraying history fairly. Then again, this is not the first time that Morgan has imposed her views on viewers and portrayed history unfairly. She did it in The Iron Lady by riding roughshod over Margaret Thatcher. So should viewers really have gone into Suffragette expecting an honest portrayal of the Suffragette movement and the era, with Morgan having written the movie?

The lack of objectivity in the film means that the cast of Suffragette have one hand tied behind their backs from the outset. In spite of this, however, Carey Mulligan, Helena Bonham Carter, Anne-Marie Duff and Natalie Press (who plays Emily Davison) all perform decently. Also, Meryl Streep puts in a solid cameo as the fire-brand Emmeline Pankhurst.

Nevertheless, the cast are further let down by clunky dialogue and by the lack of depth in their characters. Both of these have the knock-on effect of rendering the cast unsympathetic and lifeless. And when a predominantly female cast comes across as unsympathetic and lifeless about a subject as emotive and justifiable as the right for women to vote, something is seriously wrong with the film.

Over-all, Suffragette is a very disappointing movie. Yes, the film effectively highlights that women in the UK did not have the right to vote at the turn of the twentieth-century and that the Suffragettes brought the issue to the world’s attention with their antics. All the same, though, the film portrays the era and the Suffragette movement in an inexcusably one-dimensional, immature manner. Consequently, the movie is dull and if it wasn’t for the cast, the movie would have been duller still.

Posted in Ancient & Historical, Based on Real Events, Political