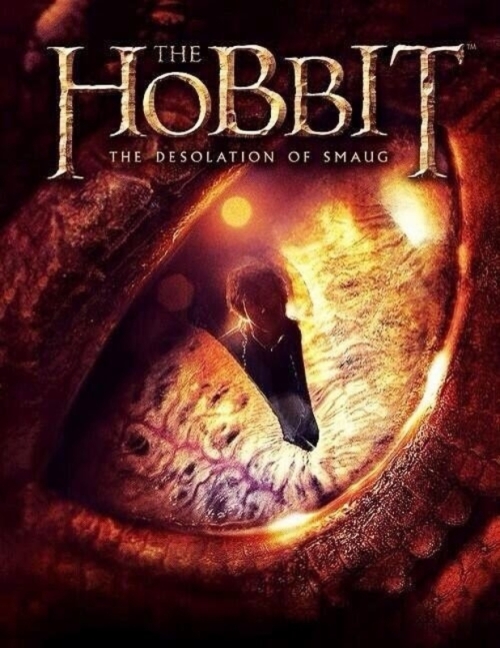 In December 2012, Peter Jackson started audiences on another nine-hour trilogy into Middle Earth, nine years after the last one ended. But anyone expecting The Hobbit Trilogy to be of the same quality as The Lord of the Rings Trilogy should have looked at the size of their respective source materials. With The Hobbit book having less than a third of the pages of The Lord of the Rings, it was unsurprising that The Hobbit I: An Expected Journey was overly-stretched, self-indulgent and stuffed with scenes that added little to the adventure. Well (predictably), The Hobbit II: The Desolation of Smaug suffers from the same syndrome, but it is a vast improvement on its predecessor.

In The Hobbit I, Bilbo (Martin Freeman) left the Shire to help Gandalf (Ian McKellen) and the dwarves of Erebor reclaim their gold and homeland from Smaug the Dragon. By the end of An Unexpected Journey, after a long and dull trek (that mimicked the journey of the fellowship in The Fellowship of the Ring), some chases, and some fights with goblins and orcs, the eagles rescued Gandalf, Bilbo and the dwarves, and flew them to within sight of the Lonely Mountain and the ruins of Erebor.

Now, it is up to our new fellowship to make their way to the Lonely Mountain and retrieve the Arkenstone, the legitimising gem for the dwarf king. Yet, in order to regain this precious pearl, someone will have to be brave enough to snatch it from under the clasp of a dragon…

The plot for The Desolation of Smaug is straightforward and fun. The storyline also runs at a much faster pace than that of An Unexpected Journey, which is a good thing (since last time out it took 43 minutes just for Bilbo to leave the Shire).

Another noteworthy matter is that Peter Jackson has somewhat rectified two of the faults of the last film by adding in a major (albeit made up) female character (Tauriel, played by Evangeline Lilly); and by giving some personality to Balin, Dwalin and Kili so that they can differentiate themselves from Thorin ‘wannabe Aragorn’ Oakenshield and the other nine (synonymous) dwarves. 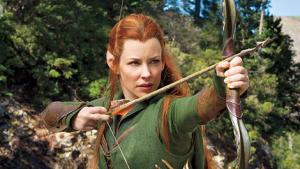 Tauriel (Evangeline Lilly), the uniquely badass elf, showing the orcs what she’s made of.

Moreover, the dragon has been done superbly well. The special effects, combined with Benedict Cumberbatch’s rich, rumbling voice make the scenes with Smaug some of the most creative dragon scenes ever seen in a movie. Undoubtedly, the arrival of Smaug is one of the best features of The Desolation of Smaug and makes the film worthwhile.

However, in a similar vein to An Unexpected Journey, at 161 minutes The Desolation of Smaug is long. (Couldn’t the eagles have flown the protagonists to the Lonely Mountain and spared us two hours?). Worse, The Hobbit II is bloated with the disapplication of the laws of physics, an overuse of CGI, too many fight scenes, some (Logger’s Leap-style) fairground rides, irrelevant sub-plots from old and new characters, and an unnecessary love triangle (stolen from that wreckage of a pentology known as Twilight) to cap it all. All of these add nothing to the story and should have been edited out.

Yes, the water rides might be as entertaining as the love triangle is contrived and pointless. But there is something troubling about the continued mowing down of the orcs by the protagonists. Why couldn’t Peter Jackson have had our heroes at least try to negotiate peace with the orcs? Is it because the orcs look deformed that they can’t be negotiated with?

One may argue that as no negotiations take place in the source material, it cannot happen in the films. But, first, we are in 2014 (not the 1930s when the book was published, or the 1960s when the book became a sensation, or even 2001 when the first of The Lord of the Rings films came out). And in 2014 peace negotiations with peoples different to our own must be given every chance to succeed. Second, Jackson has changed so much from the book that merely to state the excuse of ‘not in the source material’ is neither convincing nor valid.

Smaug (voiced by Benedict Cumberbatch), usurper and desolator of Erebor, awakening from his slumber to reveal his awe-inspiring (and frightening) size.

Perhaps, if Bilbo had posed the above-mentioned questions, it would have enriched the story and given the film a deeper moral dimension. More to the point, it would have been in character with Martin Freeman’s excellent portrayal of Bilbo and made The Desolation of Smaug a more gratifying and thought-provoking film.

Over-all, The Hobbit II: The Desolation of Smaug is a step up from An Unexpected Journey. The Desolation of Smaug moves at a decent pace; has some, if too many, enjoyable and imaginative action scenes; and a fantastic looking and aptly sounding dragon to make for an entertaining spectacle. Nevertheless, there is no getting away from The Hobbit II’s swollen running time. The Desolation of Smaug, like An Unexpected Journey before it, is burdened by the numerous, purposeless, Jackson-invented side-stories that have ruined all that is good about the first two instalments of The Hobbit Trilogy, and that are also surreptitiously sullying The Lord of the Rings Trilogy.