Tag Archives: days of future past 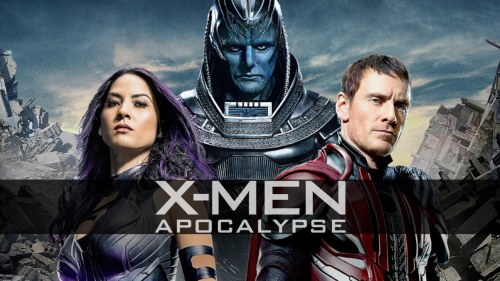 The Godfather Syndrome is a common problem for film trilogies. When the first film is a good and the second is better, the third film has a hard act to follow. So often, it cannot raise the bar to the required level and, consequently, the film is unsatisfactory. The Godfather trilogy is the most high profile to fall victim to this syndrome (hence the name), but the third film in the Alien franchise and in Sam Raimi’s Spiderman trilogy suffered from the syndrome as well. Sadly, so too does the third film in the X-Men prequel trilogy, Apocalypse.

Apocalypse (Oscar Isaac) has awakened and keen to inflict punishment, using his incredible powers, upon the ‘decadent, corrupt’ world of the 1980s.

X-Men: Apocalypse begins in Ancient Egypt with the creation of the most powerful mutant of all time (played by Oscar Isaac). This mutant is not given a name, but his enemies nickname him Apocalypse. No sooner is Apocalypse created when he is entombed and falls into a coma.

Fast forward to the 1980s and Apocalypse is awoken. He sees the world is full of decadence and corruption. So he decides that he must destroy it in order to make a new and better world. He recruits four (angry) mutants to his cause: Magneto (Michael Fassbender), Storm (Alexandra Shipp), Angel (Ben Hardy) and Psylocke (Olivia Munn), in order to carry out his master plan. Only the X-Men can stop this plan from coming to fruition. But only if they unite.

Apocalypse’s plot is quite dull, unoriginal and unfaithful to what the X-Men prequel trilogy has been about. First Class and Days of Future Past were original and interesting because they were not about good vs evil. Rather, they were about the polar-opposite approaches of Charles Xavier/Professor X and Erik Lehnsherr/Magneto to tackle the problems mutants faced in the world (mirroring the stances of Martin Luthar King and Malcolm X during the American Civil Rights movements of the 1960s). Neither Professor X’s nor Magneto’s approaches were completely right or completely wrong, which was what made First Class and Days of Future Past so fascinating and realistic (for the X-Men world that is). However, Apocalypse goes back on this theme and focusses more on stopping an all-powerful, under-developed and poorly written (and so obviously evil) villain. This is a real shame as director Bryan Singer should have done more to continue the theme of the previous two installments.

Charles Xavier/Professor X (James McAvoy) using his machine to find mutants around the world… and being mentally invaded by Apocalypse.

Yet, the near abandonment of the theme running through the first two movies of this trilogy is not the only major problem with Apocalypse’s plot. The storyline is bitty at best and incoherent at worst. As is so often the case in X-Men films, there are many characters with competing storylines. To condense so many storylines into a TV series is a struggle (just look at Game of Thrones). But to do it in a 144-minute film, and to develop the characters as well, is nigh on impossible. As a result, so much in Apocalypse is left under-explained or simply not explained at all: for example why Magneto begins the film in a metal-works factory in Poland (yes, just go with it)? Why, also, does Apocalypse need four assistants to help him execute his grand plan? (One would think these questions are profound enough to warrant answers. But, no, instead Singer spends the time explaining how Professor X went bald and how Storm’s hair turned blonde.)

It is safe to say that Apocalypse’s plot has enough holes to rival Swiss Cheese. However, to some extent one can ignore its many problems and enjoy watching some of our favourite mutants once more. Like in First Class and Days of Future Past, the acting and the dialogue is good. Again, both are a little bit down on the other two movies. But that may be due to viewers becoming accustomed to the high standard of acting set by James McAvoy, Michael Fassbender and Jennifer Lawrence in particular.

No, the only real surprise in Apocalypse is how much screen time is given to the new members of the cast; notably, Sophie Turner as the young Jean Gray. Turner’s American accent vacillates across the Atlantic during the course of the film and she does not have the screen presence or the charisma (as yet) of the more senior members of the cast. But Turner does a good job with what she is given nevertheless.

The new mutants: young Jean Grey (Sophie Turner, left), Nightcrawler (Kodi Smit-McPhee, centre) and Cyclops (Tye Sheridan, right) in the thick of the action, trying to stop Apocalypse from carrying his plan to destroy the world.

And like with the acting and the dialogue, the action scenes and the special effects are good without being spectacular. Similarly though, audiences have seen what Apocalypse has to offer before (not only in previous X-Men films, but also in other sci-fi and comic-book movies). This, therefore, leaves viewers feeling underwhelmed and yearning for something more interesting to watch.

All-in-all, X-Men: Apocalypse is a disappointing film. The storyline is a muddle, undercooked and a betrayal from what made the previous two films in the trilogy so engaging. With a plot so problematic, it is no surprise that neither the quality of its cast nor the numerous (inconsequential) action sequences can save this third film from being a let-down. Thus, The Godfather Syndrome has struck again and means that the X-Men prequel trilogy has not got the conclusive third chapter that it richly deserved.

Posted in Action, Comic Book based