In any artistic medium, there is a simple formula: show don’t tell. Invariably, whenever film directors, artists or writers show audiences the message they wish to portray in the medium, it has a far greater emotional weight upon audiences than if the same message were recanted by someone. Stacie Passon sadly does not appear to have taken this formula on board and her interesting debut film, Concussion, suffers because of it.

Kate (Julie Fein Lawrence) with her wife, Abby (Robin Weigart), after Abby gets hit by a baseball.

Concussion is a low-budget, indie drama set in present day, up-market, suburban New York. The movie starts with Abby (Robin Weigart) getting hit by a baseball in the side of the head. She suffers minor concussion from it.

Upon waking up, Abby, an interior designer/decorator by trade, who spends most of her time at the gym or in Pilates classes, becomes disillusioned with her life; especially, with regards to her loveless, lesbian marriage to Kate (Julie Fain Lawrence). With the help of her co-worker, Justin (Johnathan Tchaikovsky) Abby decides to become a high-class lesbian escort.

Concussion’s plot is simple, grounded and (almost solely) revolves round Abby, whom audiences can empathise with to a degree. In addition, the acting is decent, the setting is apt, and Passon treats the storyline’s subject matter in a non-judgmental way. This is commendable as it would have been easy to turn Concussion into a whore bashing exercise or a gratuitous light-porn film (like the four-hour dirge Nymphomaniac or the impressive Blue Is The Warmest Colour).

Abby being gentle with one of her clients, Lisa (Claudine Ohayon).

Although, strangely, by Passon treating the subject-matter with such maturity, she brings up some other issues. The thought of working/non-working women going off during the day to pay for sex suggests that people have good reason not to trust their wives, which is both worrisome and (hopefully) wrong… Unless Passon believes this issue to be more common than is generally known.

The subject-matter might be dealt with sensibly; however, apart one instance near the end of the film, Concussion lacks depth in its plot developments. Part of the problem is that the film does more telling than showing. For example, viewers are told that Abby was hit by a baseball and suffers concussion, but we are not shown either of these. Likewise, viewers are told that Abby is very involved with her local synagogue, yet we don’t see her ever go to synagogue or do anything remotely Jewish-related.… Hang on a moment, Passon herself is Jewish and is in a lesbian relationship. Is Abby merely Passon’s avatar? Or is Concussion Passon’s way of illustrating her marital problems and/or her (repressed?) sexual desires?

Regardless of what Passon’s motive behind Concussion might have been, it is understandable that Passon cannot show everything due to budgetary constraints. Nevertheless, the consequences of showing audiences too little is that the extent to which audiences can become emotionally invested in the characters is frustratingly limited; especially, as there is clearly more to the characters than is divulged. 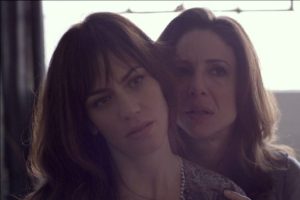 Abby with another one of her clients, Sam (Maggie Siff).

Abby, her clients and Kate probably all have interesting back-stories. And it would have been intriguing to gain a deeper understanding as to why they are the way they are; why Kate shows Abby little love; and why each of Abby’s clients come to her, as they all have their reasons. Yet, (with the exception of Sam, played by Maggie Siff), all of these details and depths are sadly missing from the film; to its detriment.

Over-all, Concussion is a frustrating and disappointing movie. The film’s premise has not been touched upon before and the movie deals with it in an adult manner. It also has a cast that buys into the subject-matter. All the same, Stacie Passon unfortunately misses the boat on Concussion. The film’s Achilles-heal is that viewers are unlikely to care about the characters and their situations. This is because the movie does too much telling and not enough showing.