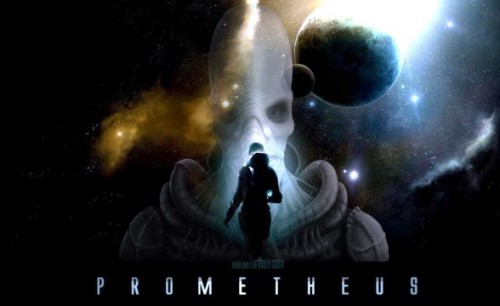 With the exception of American Gangster, the last decade has been a poor one in terms of quality films for Ridley Scott, the three-time academy award nominated director/producer. Kingdom of Heaven, Body of Lies and Robin Hood are just three of many terrible movies that he’s created, even if he has made lots of money from them. Prometheus continues this downward trend, even though it is a return to the theme of his highly successful revolutionary 1979 movie Alien.

Prometheus is the prequel to Alien. In 2089, archaeologist love-birds Elizabeth Shaw (Noomi Rapace – The Girl With The Dragon Tattoo, Sherlock Holmes II: A Game of Shadows, The Drop) and Charlie Holloway (Logan Marshall-Green – Brooklyn’s Finest, Devil, Black Dog, Red Dog) discover a star map among several unconnected ancient civilisations. Believing that they can discover the origins of humanity, they join a crew on the space-vessel Prometheus bound for the moon where they hope to unearth the answers.

Piloted by David (Michael Fassbender – X-Men: First Class, Shame, 12 Years A Slave), a haughty human-looking android with supreme amounts of knowledge, the spaceship arrives at their destination. After being given a telegrammed video by the elderly Peter Weyland (Guy Pearce – The Hurt Locker, The King’s Speech, Iron Man III), the patron of the trillion-dollar expedition, and a speech by Meredith Vickers (Charlize Theron – Monster, The Road, Snow White and the Huntsman), a Weyland Corporation employee sent to monitor the mission, the crew set off to investigate the nearby mysterious site.

Charlie, Elizabeth and David exploring the cave to find the origins of humanity. Will the statue in the background give them their answers?

The premise on which Prometheus is based is not a bad one and there are some good, refreshingly 1980s-style sci-fi horror moments to keep one in suspense. In 1979, these were innovative, but now the Alien vs. Predator genre has become so abysmally cliché that all of the horror in Prometheus looks samey and unoriginal.

And as is typical of the above-mentioned genres, little of Prometheus’ dialogue or plot makes any sense. (Even Ridley Scott has admitted that the movie leaves some questions unanswered, which suggests that tying up loose ends was not half as relevant to him as making a fortune.) The very beginning of the film (which I have not mentioned) bears no relevance to the rest of the film; with the exceptions of Elizabeth and Charlie, the reasons and motives of the various crew members aboard the Prometheus expedition are unclear or not mentioned at all; and the very end of the movie is as biologically possible as mating a bear with a piranha and producing a wolf.

Worse, Prometheus gives us virtually no insight into the origins of Alien. For a movie that is a prequel to the series, it is inexcusable. Imagine if Christopher Nolan’s Batman Begins had not explained the origins of Batman? What would have been the point in it? The same questions must be asked here.

As Prometheus’ storyline nosedives, the cast do the same. All of the actors have poorly-explained, two-dimensional characters and none of them have any chemistry between them on set. They create such little empathy that viewers are unlikely to care when they start to drop off. Even Noomi Rapace, who was brilliant as Lisbeth Salander in the Swedish versions of The Girl With The Dragon series (aka The Millennium saga), struggles in Prometheus to keep audiences interested (despite spending a percentage of the movie running around wearing not much more than a tankini). Only Michael Fassbender, as the emotionless and enigmatic robot, has the ability to maintain viewer’s concentration. But Fassbender’s character has too many holes to be plausible. 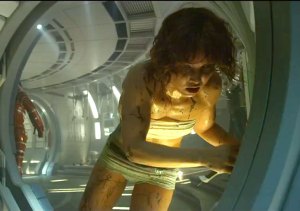 Wounded, Elizabeth is limping round the Prometheus vessel in little clothing to find some help.

Actors and characters aside, at least Prometheus has some decent sci-fi-style special effects. They are not spell-binding, though, because one has seen similar CGIs in God knows how many other movies in the genre before. What is a pity though is that the 3D is so pathetic. For a movie like Prometheus, there should have been more effort put into the 3D aspect of the film to make it worthwhile.

All-in-all, Prometheus is another appalling film to add to Ridley Scott’s recent movie-making collection. Almost nothing works in the film, from the storyline to the cast to the 3D. For a director/producer of Scott’s capacity, whose diverse range of films over the years have been of high quality, it is simply not good enough.