Review – The Chronicles of Narnia: The Voyage of the Dawn Treader (PG) [2010]

The Chronicles of Narnia series is much like Ronseal, the woodstain/wood-die product.  The Narnia series does ‘exactly what it says on the tin’ and the third instalment in the series, The Voyage of the Dan Treader, is no different.

Unlike in the first film (The Lion, The Witch and The Wardrobe) and the second one (Prince Caspian), Edmund (Skandar Keynes – Narnia series) and Lucy (Georgie Henley – Narnia series) return to the world of Narnia without Peter (William Moseley – Narnia series) and Susan (Anna Popplewell – The Girl with the Pearl Earring, Narnia Series).The latter two are too old for another adventure. In their stead, Lucy’s and Edmund’s obnoxious cousin Eustace (Will Poulter – Son of Rambow, The Revenant) enters the fray. 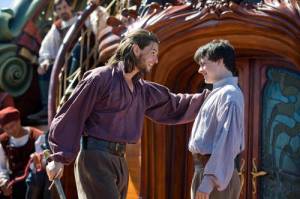 King Caspian and Edmund are delighted to see one another again. Caspian will need Edmund’s ability to wield a sword if he is to emerge victorious once more.

This time, Edmund, Lucy and Eustace have been sent back to Narnia to join King Caspian (Ben Barnes – Prince Caspian, Dorian Gray, Seventh Son) on board the king’s ship, the Dawn Treader. Caspian is on a quest to find the seven lost swords and banish the evil that resides on a dark island far away… as well as within themselves. For how the main characters evade their various temptations will be equally as tough as acquiring the swords.

The plot for The Voyage of the Dawn Treader is meant for children, so it’s easy to follow and far from complex. Although almost two hours long, neither a child nor an adult is likely to be bored throughout the movie. Indeed, the film is entertaining.

Yet, aside from the entertainment value, the acting and the dialogue are so bad it makes the three main characters in the Harry Potter series seem decent. (Anyone who’s read my review of the Deathly Hallows: Part I, will know what I think of them.) Keynes and Henley have failed to grow into Edmund and Lucy respectively over the years; whilst Barnes’ acting seems to get worse every time he appears on screen. 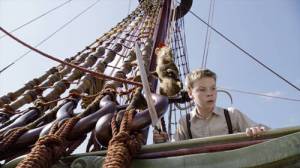 Eustace holding a sword on the Dawn Treader as he attempts to defeat Reepicheep the mouse. These two are undoubtedly these two most hilarious characters in the film.

Arguably, the exceptions to this are Poulter’s performance as Eustace and the mouse, Reepicheep (voice by Simon Pegg – Hot Fuzz, Star Trek). Eustace, despite being annoying and an unbearably difficult young boy, who detests being in Narnia almost to the bitter end, is actually quite funny. (Whether he’d be quite so funny if one had to look after him in real life is another matter.) Reepicheep, as a professional ‘swordsmouse’ that never shuts up, is similarly amusing.

Additionally, unlike in the Harry Potter films and The Lord of the Rings trilogy, the special effects here are nothing special. This is disappointing because there is little reason for the director, Michael Apted (The World is Not Enough, Enigma), to have done them poorly; other than, perhaps, a lack of enthusiasm for the project.

Then again, children are not really going to notice such details. Nor are they going to care if the acting or the dialogue is terrible. They just want to see a fun film they can follow and enjoy. The Voyage of the Dawn Treader, like the two other films in the franchise, fulfils this criterion. That it is watchable for adults is a bonus.

Posted in Book based, Children, Fantasy