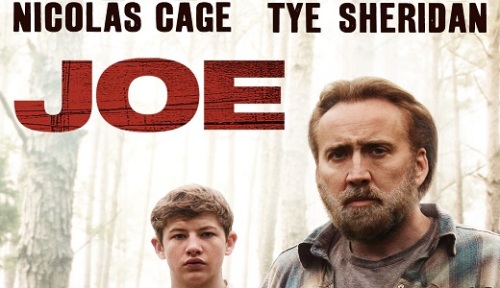 Whatever happened to the acting career of Nicolas Cage? In 1996, he won an Oscar for Leaving Las Vegas and in 2003 he was nominated for an Oscar for Adaptation., so Cage clearly can act. But since starring in the reboot of The Wickerman in 2006, Cage seemingly set his career on fire with laughable performances in critic kick-bags, such as Ghost Rider I & II, Knowing, The Sorcerer’s Apprentice, Season of the Witch and Drive Angry, to name six from the catalogue. Therefore, upon Joe, the question was: could Cage’s career sink any lower or was going to (finally) rise from the ashes?

Joe is an indie drama set in the rural, Deep South of America, and is an adaptation of Larry Brown’s 1991 novel of the same title. The film predominantly centres round Joe (Nicolas cage), an ex-convict who runs a business demolishing trees for development sites. One day, Gary (Tye Sheridan), a teenager new to the area, finds Joe and asks if he and his father, Wade (Gary Poulter), can work for him as they need money. Joe agrees, but soon discovers that Wade is an alcoholic with a dreadful character. Upon realising Wade’s ways, Joe takes on the mantle of a father figure for Gary.

Joe is a very decent raw and grisly film about poverty in the Deep South, and about ruin and redemption in general. In a similar way to Mud (also starring Tye Sheridan, plus the reborn Matthew McConaughey), not a lot happens (and what does happen is a tad predictable). But the dialogue in Joe is fantastic and the acting is superb across the board.

Wade (Gary Poulter), Gary’s alcoholic father, looking like the homeless man he was in real life (until it was sadly cut short a few months after filming ended).

Nicolas Cage shows us that he is more than just a mercenary willing to cash in on his name. For once, Cage looks like he actually wanted to get up in the morning for filming, as there is more to him in a role than merely a bland expression, a monotone for a voice, and an occasional half-hearted smile to make him your average, likeable guy (as if anyone was going to believe that Nicolas Cage was your ‘average Joe’). In Joe, Cage’s southern accent is refreshingly real, and his grizzled face reflects a man constantly holding back his pent up rage in order to stay on the right side of the law. Moreover, the way Cage’s character takes Gary under his wing is wonderful to watch and enables viewers to empathise with Joe, despite Joe otherwise being rough-around-the-edges, with a drink-driving habit and a history of violence. (If anything, it would have been nice to learn where this violent streak comes from and to find out more about Joe’s background.)

But it is not just Cage that is wonderful to behold in Joe. Like in Mud, Tye Sheridan again demonstrates that he has a long acting career ahead of him. Here, Sheridan performs magnificently as a teenager willing to work hard to put bread on the table for his family, since his father won’t do it. And, speaking of his father in the film, Gary Poulter’s performance, as the horrible alcoholic family-beater, is brilliant and worryingly realistic. What makes Poulter’s performance even more remarkable is that he was not even an actor by trade: he was a hobo! (The casting of a non-actor is not surprising for a David Gordon Green film as the director regularly picks locals for roles in his movies.) 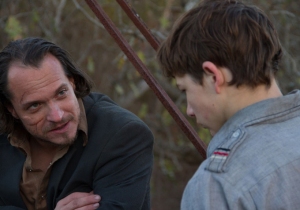 Gary speaking with Willie-Russell (Ronnie Gene Blevins). There is a reason why he has a scar under his right eye and Willie-Russell wants revenge against the man who did it.

However, it is not just the acting and dialogue that is fantastic in Joe, since the cinematography is equally good and fitting. From the broken homes (metaphorically and literally); to the trucks people drive; to the dirtiness and dusty nature of the region, the rural poverty of the Deep South and the type of people who inhabit it are well depicted. No-one in Joe personifies the place and the complexities of living in such a place more than Nicolas Cage’s character.

Over-all, Joe is a solid film that is very realistic representation of the Deep South of America. The movie may have little by way of action and plot-twists. Nevertheless, one can easily engage with the characters in the film, not least due to the dialogue and the vivid performances from the cast. Surprisingly, this includes Nicolas Cage; for in Joe he reminds us that his Oscar win and nomination, all those (many) years ago, were no flukes and that truly he can act. It might be a little early to say that Cage’s renaissance has begun. But maybe, just maybe, Cage will use Joe (as Matthew McConaughey did with The Lincoln Lawyer and Mud) as a springboard to re-launch his career.

Posted in Book based, Drama, Indie