When one thinks of a spy film, the Bourne series, Munich and Salt spring to mind. Those movies were action packed and fast-paced; and in Salt, one at least watches Angelina Jolie wearing tightly fitted costumes and doing all kinds of interesting stunts and kicks. The American, on other hand, has little of these qualities; and George Clooney (From Dusk Til Dawn, Ocean’s Eleven, The Ides of March), playing the role of an American spy in Italy, fails to appeal to the audience in the same way that Matt Damon, Eric Bana and Jolie do in their respective films. 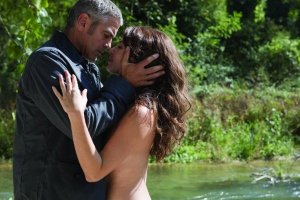 Clooney making out with Violente Placido at a picturesque and secluded stream.

In saying that, the director, Anton Corbijn (Control), has deliberately gone for a very different type of spy film relative to other recent movies within the genre. He has gone for an artistic film. One is forced to admire the beautiful Italian sceneries as well as tolerate the silence that dominates much of the film. The lack of dialogue in The American is reminiscent to Francis Coppola’s Lost In Translation. Consequently, there are numerous (and arguably pointless) scenes of Clooney alone, saying nothing. A lot of the time, the same is true when Clooney is with people. Questions asked to him are often left unanswered, which is poor-show from Corbijn.

Clooney, refreshingly, is not his usual charming self in The American. He cuts a sombre and lonely person throughout much of the film. Even in scenes when he is with people, like when he is with the priest having religious conversations or when he is with the escort/prostitute, Clara (Violenta Placido), Clooney is almost always distant, cold and unable to speak his mind. One imagines this could be indicative of spies in general: they can’t reveal their real jobs as that would most likely endanger their lives, their mission and their country. Occasionally, we see the paranoia that goes through the mind of a spy; for example, the constant look over the shoulder. But Clooney does not capture a spy’s paranoia as well as the actors in Munich do, which is a shame for him. That is not to say that Clooney does a bad job in this film. But devoid of a script, not to mention his smooth-tongue and amiable smile, he is not the same actor.

Clooney holding a rifle with a silencer as he practices his shooting accuracy.

Still, Clooney is one of the few bright spots in The American. (Other decent aspects include the gorgeous women he meets and sleeps with.) Irritatingly, the storyline, if there is one at all, has no context. Throughout the film, one wonders: why Clooney is in this small town in Italy; who he’s working for; who he’s targeting; and if he is an asset or a liability to his organisation. If the plot were fast-moving, Corbijn might have gotten away with this. But as it is slow, the movie is disinteresting and boring.

What’s more, The American is not especially entertaining. It does not matter how picturesque the Italian landscapes are or if some of the paranoia’s of being a spy are illustrated; a film’s first job is to entertain. Thus, Corbijn has let down Clooney as well as his audience.