In Jerusalem’s Holocaust Memorial Museum, Yad VaShem, there is a section honouring the Righteous Gentiles/the Righteous Among The Nations. During World War II (WWII), it is known that almost twenty-four thousand non-Jewish people risked their lives in Nazi-occupied Europe to hide and save Jews from Hitler’s murderous Final Solution. Leopold/Poldek Socha was one such courageous individual. In a powerful but unflattering portrayal of Poldek, the Jews he saved, and the era, In Darkness commemorates the bravery of this unconventional hero.

Poldek Socha (Robert Wieckiewicz) leads thirteen Jews through the caverns of the stinking sewers to find them a safe haven from their Nazi persecutors.

In Darkness is a low-budget Polish film that centres round Poldek Socha (Robert Wieckiewicz – The Dark House, Zero, Lech Walesa), a Polish sewer worker in Lvov. Using his extensive knowledge of the town’s sewer system, he hides thirteen Jews in the sewers just before the Lvov Ghetto is liquidated by the Nazis. For fourteen months, Poldek cares for his Jews. He brings them food and other essentials, until the Soviets liberate Lvov in July 1943, when he leads them to safety.

The storyline for In Darkness is straightforward and well put together. At 145 minutes, the film might seem a little long and repetitive, but the distressing nature of the movie ensures that it is not tedious at all.

The intensity of the Jew-hatred, the noise of rapid firing machine-guns and the sight of brutality against innocent people creates an intimidating atmosphere. Like tension in a string, one can feel the Jews’ fear of the Nazis and the local Polish population. The darkness of the sewers and the shaking of the camera enhance the film’s edginess by making the movie seem claustrophobic. At times, notably when Poldek moves the Jews from one excrement-running tunnel to another, the movie becomes almost unbearable to watch.

Poldek's friend, Bortnik (Michal Zurawski). Bortnik is the feared leader of the Ukrainian Nazis in Lvov.

Yet, the ending is probably the most awful and poignant part of the film. As the euphoria of saving the thirteen Jews is at its height, one learns how Poldek died and what was said at his funeral. It should leave anyone with decency sickened! Alas, it’s as unsurprising as it is shocking; a reflection of the profound levels of antisemitism in pre- and post-WWII Poland.

But was Poldek not part of the same society? In Darkness sheds light on his personality and shows him to be a very different kind of hero to Oscar Schindler (played superbly by Liam Neeson in the brilliant 1993 film, Schindler’s List). Whilst Schindler was the dashing businessman who became horrified by the Nazis’ treatment of the Jews, Poldek was not handsome and was quite indifferent to the cruelty dished out by the Nazis. Indeed, director Agnieszka Holland (The Secret Garden, The Wire) reveals on numerous occasions during the film that Poldek was just an ordinary man doing his mundane job and held deep-rooted antisemitic views.

It is not even clear why Poldek ends up hiding and saving the thirteen Jews. Is it because they pay him nicely, so he can afford jewellery for his wife, Wanda (Kinga Preis – The Dark House)? Is it because Poldek knows the unspeakable fate that awaits him and his family if he informs the authorities of the Jews? Or is it out of a sense of moral righteousness? Perhaps not even Poldek, himself, knew. Robert Wieckiewicz vividly captures Poldek’s constant vacillations, as well as his fear of being found out by the local Poles and the Nazis, both of which are always eager to turn in more Jews and their collaborators.

They may be holed up in the dank sewers, but the Jews still manage to celebrate the festival of Hannukkah right under the noses of the Nazis.

Although the cast play very well, Poldek, the people of Lvov and the Nazis are all given critical depictions throughout the movie. But what is more interesting is that Holland has not left the terrified Jews off the hook either. She shows them to be people who are grateful and ungrateful to Poldek; treacherous and edgy among themselves; plus lustful, amongst other things. Hence, In Darkness portrays the thirteen Jews as real people, feeling the pressures of their situation. Again, this is a stark contrast to the Jews in Schindler’s List and other Holocaust movies, like The Pianist or The Boy With The Striped Pyjamas, which depicts them as models of immaculate behaviour.

Over-all, In Darkness is an exceptional but harrowing film. It not only enables us to understand the period, it forces us to experience the torment that the thirteen Jews in the sewers endured for fourteen months. Above-all, In Darkness points out why Poldek Socha should be immortalised among the Righteous Gentiles in Yad VaShem. Despite his antisemitic sentiments and morally dubious reasons for initially hiding the Jews, he showed himself to be a hero. Not a fashionable hero like Oscar Schindler, but one who was willing to stand up to evil and put his, and his family’s, life on the line to save innocent people. Amen!

Posted in Based on Real Events, Drama

Travelling can often be long and boring, regardless of whether it is on a bus down the road or on an aeroplane across the world. Alas, despite one heck of a trek, one feels much the same whilst sitting through The Way Back.

The film is based on true events as described in the book, The Long Walk, by Slawomir Rawicz. (The book, however, has recently been proven to be a work of fiction.) The story centres on six men, who escaped from a Siberian gulag in the winter of 1940 and made their way south to India on foot. The distance alone sounds daunting to even the most determined of souls. The inhospitable terrain and harsh weather conditions make the task Herculean, if not outright impossible. 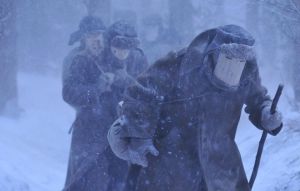 Janusz, played by Jim Sturgess, leads the way through the fierce snow storm. The blizzard is so strong they have to cover their faces in order to see where they're going.

The director, Peter Weir (Master and Commander: The Far Side of the World, The Truman Show, Gallipoli) certainly captures the difficulties the heroes face. From the bitingly cold, white desert of Siberia to the scorching heat of the Mongolian/Chinese one, the struggle to keep on going is vividly portrayed. The lack of food and water is a constant problem. Hunger, thirst, cold and skin problems are a constant reminder of the fragility of mankind against unforgiving mother-nature.

Yet, throughout the movie, one wonders what the goals of the main characters are. Once they have escaped, then what? One gets the impression that escaping from the gulag is the end in and of itself; which, of course, it cannot be.

An even greater travesty for The Way Back is that, whilst the acting is generally good, the key characters do not develop. Worse, Weir fails to make us empathise with the heroes. With the exceptions of the American ‘Mister’ Smith (Ed Harris – A Beautiful Mind, A History of Violence), the criminal Valka (Colin Farrell – Phone Booth, Miami Vice, SWAT), and Irena (Saoirse Ronan – Atonement, The Lovely Bones) for being a woman; the other characters do not stand out: Janusz (Jim Sturgess – Legend of the Guardians: The Owls of Ga’Hoole, 21, One Day), Tomasz (Alexandru Potocean – 4 Months, 3 Weeks, 2 Days, The Paper will be Blue), Zoran (Dragos Bucur – Tuesday After Christmas, The Godmother) and Andrei (Dejan Angelov – Scorpius Gigantus, Until Death) all seem to merge into the same kind-hearted character. Whilst benevolence in such situations is to be admired, it makes it hard to differentiate them; especially as they all look the same dirty, scraggy outlaws.

The accents are also disappointing. Apart from with Colin Farrell, there is little consistency in the actors’ Slavic accents. (Ed Harris uses his American accent throughout the film so is exempt from criticism.) For some of the time, their accents are surprisingly good. But just as one starts to believe that they could actually be Polish or Russian (depending upon where they claim to be from in the vast USSR), out pops their real accents to undo it all. One would have thought that an experienced director, like Weir, would have noticed this during filming. Evidently not.

The party have to endure seemingly endless baron planes during their trek. The baking-hot, sandy deserts of Mongolia and China are just as cruel as snowy Siberia.

Another noticeable thing about the main characters is that none of them make an attempt to violate Irena. This is more than a tad surprising considering that some of these men had been in the gulags for years, and so would not have had the company of a woman for equally as long. Also, bearing in mind the Red Army’s behaviour in Eastern Europe in the latter part of World War II, the characters’ disinterest in Irena appears wholly inaccurate within the historical context. (Not that I am condoning rape amongst former gulag prisoners, of course.)

One thing the film gets right, historically, is the way the gulags were run. Hardened criminals were virtually given carte blanche to terrorise other inmates; especially if they were political prisoners. In addition, the topography throughout the movie, which the National Geographic channel helped to choose, is wonderful.

However, whilst one can appreciate picturesque landscapes, a film that lasts more than two hours has to give its audience more to enjoy than mere terrain. Although The Way Back had to be long to ensure the audience grasps the extent of the distance the main characters walked; not enough happens to them to sustain the viewers’ interest and concentration. Ironically, one comes out of this film thinking that, despite witnessing a journey from Siberia to India, they had not seen much.

Posted in Book based, Thriller