For a psychological thriller to be worth its while, it invariably has to venture into disturbing realms to the extent that one wonders what sort of a person came up with the ideas. This was arguably the case with Martin Scorsese’s Shutter Island and Darren Aranofsky’s Requiem For A Dream and Black Swan. The Skin I Live In, despite being very different to the above-mentioned films, successfully takes us once again into this unsettling territory. 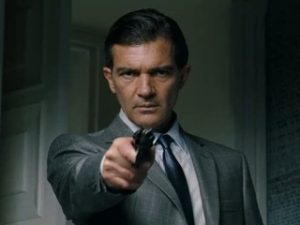 The Skin I Live In (La Piel Que Habito) is a Spanish film, based on Thierry Jonquet’s book, Tarantula. The movie centres round Dr. Robert Ledgard (Antonio Banderas – The Mask of Zorro, Shrek I-IV, Puss In Boots), a genius but deeply troubled plastic surgeon, who specialises in (unethical) skin repair and enhancement. After his teenage daughter, Norma (Blanca Suárez – Shiver, Cowards, The Pelayos), is raped by a boy her own age, called Vicente (Jan Cornet – The Night of the Brother, Camino, Red Lights), Robert decides to kidnap Vicente and punish him. But what does Robert plan to do with Vicente? Does the former wish to use the latter as his laboratorial guinea pig? Or does Robert have something more distressing in mind?

The plot is intelligent and absorbing, with a very unnerving twist. (Don’t worry, no spoilers in this review.) Yet, the storyline suffers from a general lack of clarity. First, one has difficulty knowing which year he/she is watching. Scenes may roll into one another smoothly, but the film skips regularly back and forth over a six year period in a confusing way. Second, one is never sure of Robert’s intentions, even by the end.

Moreover, there are some loose-ends in the plot, and other parts of it are left without purpose or proper explanation, such as the sub-story near the beginning about Robert’s half-brother, Zeca (Roberto Álamo – Football Days, Take My Eyes). Arguably, the reason for the lack of clarity is because the director, Pedro Almodóvar (Talk To Her, Volver, Mina), has gone for a more artistic-style of film, like Lost In Translation and The American. This means that there is relatively little dialogue throughout The Skin I Live In. Instead, one has to figure out the message of the scene via, at times, ambiguous expressions and body-language, particularly from the main character, Robert.

Playing Robert, the James Bond-/George Clooney-esq Banderas is without doubt the star of the film. In a superb display, Banderas exemplifies an intelligent, stony-faced man filled with tragedy, spite and (perturbing) ambition. No other member of the cast comes close to his level of performance. Marisa Paredes (All About My Mother, The Devil’s Backbone, Mina) may not do a bad job playing Robert’s mother, Marilia. But Marilia lacks the depth of Robert’s personality, which is revealed when she is given the chance to explain herself during a heart-to-heart with the gorgeous Vera (Elena Anaya – Talk To Her, Van Helsing, Room In Rome). Similarly, Elena Anaya, Jan Corbit and Roberto Álamo suffer from the same problems, and aren’t given ample time to express themselves. This, just like aspects of the plot, is to the movie’s detriment.

The quality of some of the acting lets the film down; yet, the same cannot be said for the music. It might sound unconventional and strange, but apart from the one scene with techno music (which is completely out of place) the music achieves Almodóvar’s ambition of giving the scene an ominous and tense feel. (One strike at high a piano key every few seconds; one hit of the drum over the same amount of time; and regular short, sharp notes from string-instruments are not classic ways of building eeriness or tension. Then again, it makes a refreshing change from tacky horror films, like Scream and The Eye, which adopt unbearably long notes from string-instruments, followed by a sudden crescendo to make viewers jump out of their skin.)

Robert's captive, Vicente (Jan Cornet), chained to a wall and drinking from a bucket.

Just as the music sounds odd throughout The Skin I Live In, so too are the aesthetics. Robert’s stunning mansion-cum-residency for his ‘patients’ is filled with large paintings of naked people, with unnaturally round heads and no faces. Just by seeing these, one gets the impression that Robert has some weird tastes long before the film comes to its mentally repelling and horrifying conclusion.

Ultimately, The Skin I Live In has its drawbacks and could have been less confusing. Nevertheless, Antonio Banderas performs brilliantly; and the unconventional nature of the film and the unusual storyline make for psychosomatically disturbing viewing. To Almodóvar’s credit, the film is not just a spin-off of an Aranofsky movie, and adds something new to the genre. Still though, just like with other psychological thrillers, by the end of The Skin I Live In one is likely to question the (in)sanity of the man who put this film together.