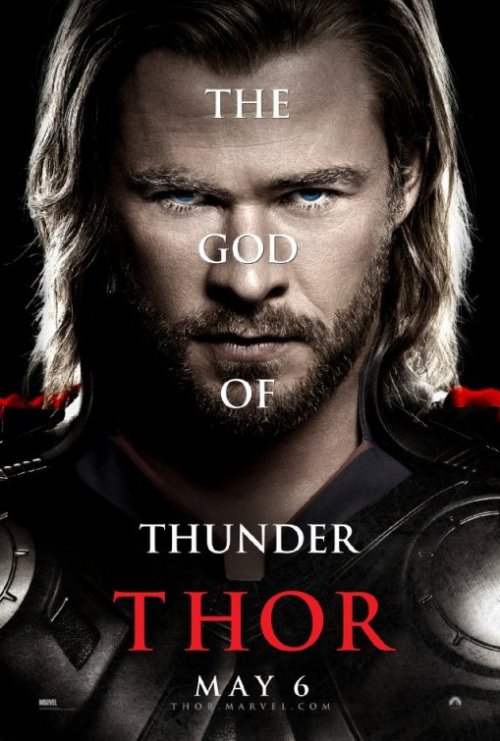 Another superhero movie? Haven’t we seen it all before? In fairness, one probably has seen a great deal of what Thor has to offer; especially if one is interested in this genre. Nevertheless, despite being a predominantly male-orientated film, Thor is an enjoyable movie with some awesome special effects.

Thor, left, standing behind his father, King Odin, and alongside his brother, Loki as they approach their enemies..

Thor is about (surprise, surprise) a young man called Thor (Chris Hemsworth – Star Trek, Red Dawn, The Avengers Assemble). He is a ferocious, unnaturally powerful warrior and heir to the throne of Asgard. Yet, Thor is arrogant and cruel. After disobeying his father, King Odin (Anthony Hopkins – Hannibal series, Mission Impossible II, Fracture), he is stripped of his powers and his hammer (the source of his powers); and banished from Asgard.

He wakes up to find himself in the desert of New Mexico, America, to be surrounded by a scientist called Jane (Natalie Portman – Black Swan, Star Wars I–III, Lawless), plus her assistants Darcy (Kat Dennings – The 40 Year Old Virgin, The House Bunny, Lives of the Saints) and Erik (Stellan Skarsgard – Pirates of the Caribbean II & III, Angels and Demons, The Avengers Assemble). Thor is determined to do whatever it takes to regain his god-like powers and return to Asgard. Meanwhile in Asgard, in Thor’s absence, a traitor increases his influence over the ailing Odin and his court. This will set Asgard to war, again, against the frost-people of Jotenheim.

Despite being about fictional realms, the plot for Thor is easy to follow. The director, Kenneth Branagh (Henry V, Frankenstein, Valkyrie), has structured the film well so that each scene flows nicely after the other and the pace of the film is just right. As a result, Thor is a very entertaining movie. Undoubtedly, the action scenes in the film are the highlight as they are superb and will leave viewers wanting more.

The movie may lack the goriness of Watchmen (not to mention the political connotations of that film); yet, Thor makes up for it in special effects. Regardless of whether they are accompanying the action scenes or are merely backgrounds for the fictional sceneries of the different worlds, the special effects throughout are fantastic. In some ways, they are so good they almost rival those in Avatar. It is a shame that Asgard is explored less than Pandora because some of the sceneries in Thor have the same ‘wow’ factor; particularly during the credits at the end. The 3D assists and makes the effects a little more spell-binding; however, on the whole, Thor is another example of a 2D film that has been converted, post-production, into 3D.

Thor promising Jane that he will return to Earth to see her.

Unlike the action scenes and the special effects, the acting in Thor is quite average. Chris Hemsworth performs adequately as the main character. But, as Thor, he is not given the depth of personality to make himself stand out in the same way as Christian Bale does as Batman. This results in him coming across as quite immature and superficial.

It is a shame that less attention is given to Thor’s younger brother, Loki (Tom Hiddleston – Conspiracy, Midnight In Paris, The Avengers Assemble), as it could have made for interesting viewing. But, alas, we are deprived of this. Instead, we have the standard ‘lesser’ brother who wants to emulate his older, more decorated sibling. The other characters, for better or worse, are not given much time on screen. Again, they all have little by way of depth and do not add much to the film. (Yes, even the gorgeous Natalie Portman.)

Ultimately, Thor may initially have the feel of ‘yet-another-superhero-movie.’ It may not have the violence of Watchmen or the deep characters of Christopher Nolan’s Batman trilogy, or the political nuances of those films. Nevertheless, Thor is a fun film with plenty of action and some awe-inspiring sci-fi-style special effects.