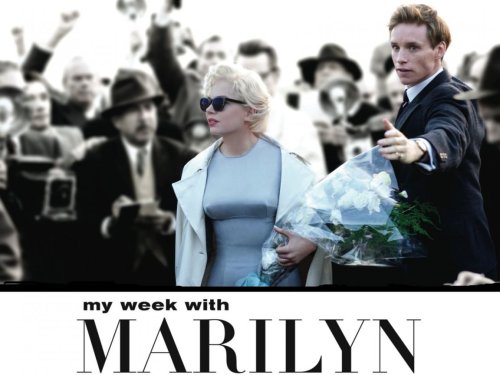 Upon seeing the title My Week With Marilyn, one would think it was about a week that an individual spent alone with the mother of all blondes. Yet, the title, like Marilyn Monroe herself, is deceiving. The film is interestingly about Marilyn, and the person behind the icon who, in her day, took Hollywood by storm.

The movie is based on true events and on the diary that a twenty-three year man wrote about his week-long affair with Marilyn when she came to England to shoot the film The Prince & The Showgirl in 1957. Colin Clark (Eddie Redmayne – The Other Boleyn Girl, Black Death, Les Misérables) is an Eton-educated young adult, who wants to make his living as a film director, despite his parents’ disapproval. Shortly after moving to London, he gets a job as a third-assistant director, otherwise known as a ‘go-getter’, to Sir Lawrence Olivier (Kenneth Branagh – Henry V, Valkyrie, Wallander) as the latter acts and shoots the film, The Prince & The Showgirl. The movie stars Marilyn Monroe (Michelle Williams – Brokeback Mountain, Shutter Island, Oz: The Great & The Powerful) as Elsie.

Marilyn is problematical on set, which tries Olivier’s patience considerably. As she is frequently late for filming, Olivier regularly sends Colin to find out if she is ill or not. It is from this that a week long relationship develops between an awe-struck Colin and Marilyn.

The plot for My Week With Marilyn is straightforward. The pace of the film moves surprisingly quickly, as the scenes change one after the one rapidly. Yet, the storyline doesn’t really go anywhere. Consequently, the movie fast becomes tedious, making the ninety-nine minutes appear (aggravatingly) longer. That the dialogue, for the most part, is quite contrived does not aid the film either. 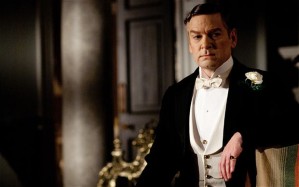 Sir Lawrence Olivier (Kenneth Branagh) impatiently waiting for the perennially late Marilyn Monroe before he can begin filming. Frustration frequently gets the better of him.

Nevertheless, there are some strong performances in My Week With Marilyn, such as Judi Dench (Shakespeare In Love, Notes On A Scandal, Skyfall), Michelle Williams and Kenneth Branagh. Whilst Dench, as ever, plays her standard M-/Queen Elizabeth-type role with authority, Williams captures Marilyn Monroe brilliantly, highlighting her character’s insecurities, her alcohol and drug addictions, and her unhappy marriage with the author, Arthur Miller (Dougray Scott – Deep Impact, Mission: Impossible II, Last Passenger). Yet, at the same time, Williams also shows Marilyn to be witty, intelligent and encapsulating. From Williams’ performance, one can easily see why Marilyn was the sex-object of her day, captivating to watch and far from dumb.

In a similarly decent display, Branagh illustrates the reasons for why Olivier made the movie, The Prince & The Showgirl in 1957. Fearing that the British film industry was falling behind Hollywood (and trying to revive his own acting career), bringing in Marilyn was his way of trying to deal with the problem. Olivier’s apparent exasperation with Marilyn was not born out of her tardiness on set, but rather by his own fears that he was ‘past it’ (and that Marilyn was the glamorous future). Again, Branagh portrays all of this solidly, if not with excellence.

However, whilst the acting from those three characters is worth watching, the same cannot be said for Eddie Redmayne, Emma Watson (Harry Potter I-VII(ii), The Perks Of Being A Wallflower) and Dominic Cooper (Captain America: The First Avenger, The Devil’s Double, Abraham Lincoln: Vampire Hunter).  As the central character, Redmayne gives a weak performance. One does not believe that Colin is in awe of Marilyn throughout the film (much less that he’d worship the ground she walks on), which is a terrible failure on Redmayne’s behalf considering what the movie’s supposed to be about.

Marilyn Monroe (Michelle Williams) playing up to her English audience by doing her trademark pose. No doubt, her fans were dumbstruck by it.

Likewise, Watson (again) flatters to deceive. Her character in the film may not be the inflexible rod that is Hermione Grainger in the Harry Potter series; nevertheless, Watson still comes across as uptight and two-dimensional. (Although, the lack of depth could be attributed more to director Simon Curtis than her.) As for Cooper, his performance as Marilyn’s aid is a great dip in comparison to his displays in The Devil’s Double. In that movie, there was intensity and consistency to his performances as Uday Hussein and Latif Yahia, not least in the Arabic accent. In My Week With Marilyn, Cooper’s character is pathetically shallow and his American accent is poor, often reverting to his normal English, south-London accent.

The acting may vary in quality, but one aspect of the film that cannot be questioned is the character’s 1950s-style clothing, hairstyles and gear. Nothing looks out of place, especially the ridiculously large cameras that the journalists carry. (Whether movie stars were harassed by the populous and the media in the 1950s like they are today is dubious. Then again, Marilyn was not the average celebrity either.)

Over-all, My Week With Marilyn is oddly fast-moving but dull; boring even. The bright spot for the film is undoubtedly Michelle Williams’s reincarnation of Marilyn Monroe. Williams brings forth all the troubles and qualities that her character possessed, illustrating that those who thought (or still think) that Marilyn was nothing more than an air-headed blonde were the real fools.