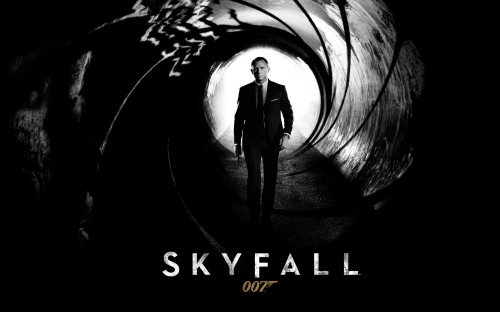 The 1990s was a pretty decent era for James Bond. Goldeneye, Tomorrow Never Dies and The World Is Not Enough were all very acceptable Bond films. But then, in 2002, Die Another Die ruined it all. Subsequently, MGM, the owners of the 007 franchise, completely changed the direction of Bond to make it more original, as Casino Royale (2006) and The Quantum of Solace demonstrate. Skyfall cleverly continues this trend, but not without hitches.

The stunning and enigmatic Sévérine (Bérénice Malohe). Her style and dangerous background make her an apt fit for Bond’s affections.

Skyfall begins with M (Judi Dench) coming under intense pressure to resign, following a failed mission in Turkey. After meeting with Gareth Mellory (Ralph Fiennes), the British Intelligence and Security Committee Chairman, M discovers that the computer in her office in MI6 has been hacked and a bomb explodes in MI6 headquarters. M subsequently turns to her secret agents, Eve (Naomi Harris) and James Bond (Daniel Craig), who is suffering from psychological problems following events in Turkey, to find out who was behind the attack.

There is much to admire about Skyfall. That a significant proportion of it is filmed in Britain is bold; it gives us a hint at how MI6 might work in the event of war on British soil; and the last scene of the movie is very clever. Also, for the first 100 minutes or so, the plot is logical and intelligent. Cyber-terrorism is a very current issue, and director Sam Mendes conveys the threat well.

It is just a shame that the last 44 minutes drag and has only a tenuous link to the first part of the film. Indeed, it renders the purpose of going to exotic Shanghai pointless (not that that was ever more than a cynical attempt to tap into the Chinese market) and, worse, it throws up plagiarism issues with the exceptionally magnificent Batman Begins.

Eve (Naomi Harris) dressed classily, while in the midst of an MI6 operation.

Moreover, Skyfall appears to be torn in several directions. Sir Ian Fleming wrote James Bond as a satire on the British secret service. Yet, because MGM now want Bond to be more grounded (and even bleed), the fundamental element of 007 has been lost. Additionally, if MGM truly want to make Bond plausible, they should look toward Tinker Tailor Soldier Spy and Shadow Dancer, and remove the Expendables-/Mission: Impossible-style stunts and action scenes. Those always look ridiculous and undermine all attempts at realism. (Besides, those scenes have become so clichéd that one is unlikely to miss them.)

The change of direction for 007 movies has also greatly impacted upon the appearance and character of James Bond, himself. Nevertheless, it is not Craig’s blond hair and lighter features that differentiate him from his predecessors, Roger Moore and Pearce Brosnan. Rather, it is his black humour, as well as his lack of suave and touché lines. That is not to say that Craig performs badly as the Bond he’s been asked to perform; actually, he’s rather good. But that doesn’t make him seem any more like the James Bond of old.

Yet, it is not just Craig’s Bond that has been given a new lease of life; the villains have too. Silva, embraced whole-heartedly and delightfully by the Oscar-winning Javier Bardem, is by far the most flamboyant and hilarious Bond baddie. However, it is blatantly obvious that Sam Mendes drew his inspiration from the villains in Christopher Nolan’s The Dark Knight (and he didn’t need to spell it out in an interview either). Mendes should have been aware that stepping onto the haloed territory of the Joker and, to a lesser extent, Two-Face is like trying to win a game of ice-hockey while skating on thin ice. Can anyone really say with conviction that Bardem’s Silva was on a par with Heath Ledger’s Joker?

The blond-haired villain, Silva (Javier Bardem), teases Bond, while the latter is tied up. Haven’t we seen such a scenario before?

Craig and Bardem aside, the performances from Ralph Fiennes and Judi Dench are typically strong and down to earth. The same can be said for Ben Whishaw, who plays the young, new Q with much spirit and humour to make himself, potentially, the long-term successor to the late Desmond Llewelyn.

Conversely, Naomi Harris, as Eve, never convinces that she’s a secret agent, unlike Jessica Chastain in The Debt or Julia Roberts in Duplicity. Harris’ Eve also lacks chemistry with Craig’s Bond. Maybe both of those things are deliberate, but if that is true then MI6 would never have sent her into the field, thereby revealing another flaw in the movie’s attempt at realism.

All-in-all, Skyfall is not a bad film and continues the interesting trend of Casino Royale and The Quantum of Solace. Skyfall has intelligence and a cast that does justice to the more credible, if unconventional direction that MGM have taken Bond toward. This does not mean that the film is problem-free, aside from being too long and recycling parts of Nolan’s Dark Knight Trilogy. No, if MGM truly wish for 007 to depart from the approach of the 1990s Bond films, they must not stand half-way as they have here: they must make James Bond chillingly realistic.