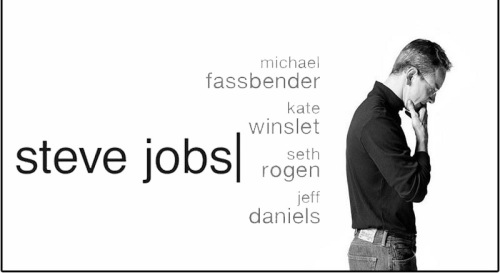 In 2011, Steve Jobs, the co-founder of Apple, died from pancreatic cancer at the age of 56. At the time of his death, he was hailed as a great man, a genius, an innovator, and a man who had stayed loyal to his dreams and fulfilled them. Yet, there was another side to Steve Jobs that was largely ignored in the obituaries. Danny Boyle’s Steve Jobs focusses on this side of the man to paint a very different portrait of him. 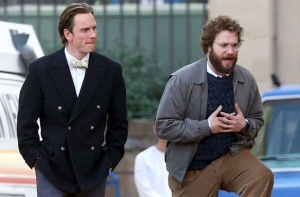 Young Steve Jobs (Michael Fassbender, left) talking through his business plans with his friend and co-founder, Steve ‘Waz’ Wazniak (Seth Rogen, right, playing decently and in a non-comedic role for a change).

Steve Jobs is a dramatised biopic of the titular character (played by Michael Fassbender). It centres round events behind the scenes at the launch of the Apple Macintosh in 1984; at the launch of NeXT in 1988; and at the launch of the iMac in 1998. With each launch, we get to see Jobs’ true nature, and the changes in his relationships with his assistant Joanna Hoffman (Kate Winslet); with his friend and fellow co-founder Steve ‘Waz’ Wazniak (Seth Rogen); with the original CEO of Apple, John Sculley (Jeff Daniels); as well as with his former girlfriend, Chrisann Brennan (Katherine Waterston), and their daughter, Lisa (played by Mackenzie Moss at five, Ripley Sobo at nine, and Perla Haney-Jardine at nineteen).

Steve Jobs is a neat and engaging film about the man Steve Jobs actually was as opposed to the myth many believe in. The movie is told via three separate acts that are more theatrical in tone than cinematic. Between Danny Boyle’s excellent directing and Aaron Sorkin’s brilliant fast and witty dialogue, the movie is delivered via long expositions with few editing cuts. This gives the film a genuine feel of continuity and realism that is typical of other films Sorkin has worked on e.g. The Social Network.

Through the three acts, we learn about the sort of man that Steve Jobs was in real life. Yes, he was ambitious and a great innovator. But he was also unreasonable; treated his staff appallingly (with the possible exception of Joanna Hoffman); alienated his friends and colleagues without remorse; denied paternity to his daughter, Lisa; and did not give a cent to his ex-girlfriend, Chrisann Brennan, for child maintenance for Lisa without a court order forcing him to do so (and even then, Jobs only gave the minimal amount; a pittance of what he was earning).

Steve Jobs playing on the Apple Macintosh with his daughter, Lisa (at aged five, played by Makenzie Moss).

Why was Jobs like this? God only knows. But Steve Jobs at least attempts to explain the unexplainable. It does this in two different ways: one is by a telling us about an event in Jobs’ early childhood and the effect this had on him; and the other is through Michael Fassbender’s terrific acting. Indeed, the former goes hand-in-hand with the latter. Fassbender’s tight-faced rage, his acerbic belittling of others, and his pathological drive to create better, awe-inspiring products illustrates how hurt (damaged) Jobs was by his childhood.

How true this explanation is (in respect of Jobs’ behaviour) is contentious. Several people who knew him well claim that the film is inaccurate, including Edwin Catmull, the head of Pixar (a company that Jobs was a board member of); Tim Cook, the current Apple CEO; and Waz, himself. Catmull claims that the film’s story is ‘wrong’ (although he does not give a reason for this), and Waz has said that ‘everything in the movie did not happen’ since he never spoke to Jobs before the events that the film portrays. Now, granted, Danny Boyle’s movie does take (considerable) artistic licence. One could never believe that the events happened in real life as they are portrayed in the film because that would have been unrealistic and impossible. But that does not mean that the events did not happen; they just happened at different times and Boyle has put them into his film at certain points to give the movie a solid and satisfying narrative arch. 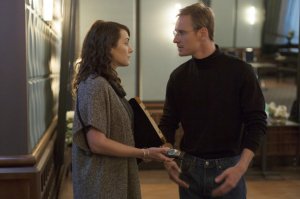 An older Steve Jobs talking with his long-time business assistant, Joanna Hoffman (Kate Winslet, with a decent if at times dodgy eastern European, New York accent). Joanna was known as the only person to ever stand up to Jobs and he respected her for it.

Nevertheless, the film’s tight, solid and satisfying arch comes at a cost. In some respects it is too tight. Boyle misses out plenty of moments and events in Jobs’ life that could have altered the perceptions of Jobs. Adding a couple of key moments/events (or even mentioning them) about his family and about the long, protracted manner of his death could have given the film a more complete feeling and enabled viewers to make better informed judgements on Jobs. Yet, even without these moments, one can still form strong conclusions on the man.

Over-all, Steve Jobs is an enjoyable and interesting film about an almost mythical man. In an objective manner, with superb acting, dialogue and directing, we see Steve Jobs for what he was like as a person, how he changed over the years, and the events that shaped him into the man he became, for better and for worse. It is debatable how close to the truth this film is to reality. More than anything, though, Steve Jobs highlights that a person can be a genius and create phenomenal products, but that his/her products can be greater than the person who created them.