One of the most striking and farcical features of action movies is that there is much shooting, running and chasing, in one form or another, with key aspects of the plots taking place under such circumstances. The Die Hard, Mission: Impossible, and Fast and the Furious franchises all have this odd and surreal symptom. JJ Abrams and Damon Lindeloff, despite creating an enjoyable and watchable film, have taken this symptom to its zenith in Star Trek II: Into Darkness. 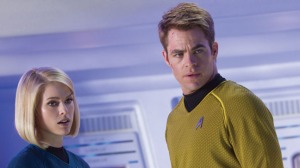 Captain James Kirk (Chris Pine) mulling over whether it would be a good idea to take Dr. Carol Marcus (Alice Eve) on board.

In essence, that is the plot for Star Trek II: Into Darkness and it makes for an easy and entertaining 132 minutes, irrespective of whether one is a Star Trek fan or not, in the same way as the 2009 Star Trek film did. Moreover, the special effects in Into Darkness are terrific, and the 3D works a treat as well, especially in IMAX, which was designed for such films. 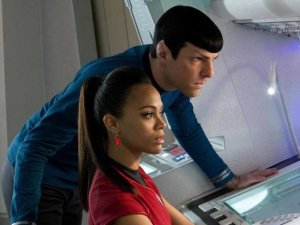 While Into Darkness has much in common with the 2009 Star Trek movie, the sequel has many more contrived aspects to its storyline than the prequel. One can almost draw the plot arch as the film goes along. Fans, though, are more likely to forgive such plot problems than non-fans. That is, if fans and non-fans have a chance to think about the issues with the storyline while watching the film. JJ Abrams and Damon Lindeloff have made every plot detail and element in Into Darkness be done either on the run or in the midst of a shoot-out. It is as if they knew that the movie’s storyline makes as much sense as Lost did by the end. Abrams (with his trademark lens-flare) and Lindeloff constantly distract viewers from being able to realise the plot’s deficiencies, here, in the same way that shoot-outs, explosions, chase scenes and stunts divert audiences’ attentions from the flaws in the various Die Hard, Mission: Impossible, and Fast and the Furious movies.

Provided one does not focus too much on the storyline of Into Darkness, one can enjoy the contrast in personalities between the impulsive Captain Kirk and the cold, rational Commander Spock, and both Chris Pine and Zachary Quinto play their respective roles very decently. There is also more humour than expected between the two of them, which is always welcome. The same can be said for Karl Urban’s performance as Bones and Simon Pegg’s as Scotty, as they play their roles well without being anything special.

Alas, the same cannot be said for Zoe Saldana as Uhura this time, or Alice Eve as Carol Marcus. Uhura’s role in Into Darkness, unlike in the prequel, is too peripheral and meaningless to be remembered, and Saldana does not do herself justice when on screen; and sad to say, the only thing of note that Eve does as Carol Marcus is to stand in front of Kirk in a bikini. (And the point of that scene was…?)

The villain, John Harrison (Benedict Cumberbatch), fighting against his adversaries who are out to kill him.

Yet, the real star of the film is Benedict Cumberbatch. His acting, as the villain, is head and shoulders above the rest of the cast. When Cumberbatch speaks, it does not matter what he says or how ludicrous it may sound because it is stated with authority to the extent that implausible matters are believable. Regardless of whether one is a Star Trek fan or not, one should almost watch Into Darkness for Cumberbatch’s performance alone.

Over-all, Star Trek II: Into Darkness is an entertaining film for Star Trek fans and non-fans alike. The special effects are excellent, the relationship between Kirk and Spock is funnier than ever, and Benedict Cumberbatch’s portrayal of the villain is outstanding. Indeed, one does not even need to get over the movie’s virtually non-existent storyline and the ridiculous way in which everything is done at a hundred miles an hour to make up for the plot’s numerous shortcomings to fully appreciate the movie for what it is.