2015 was the year that the Lesbian, Gay, Bisexual and Transgender (LGBT) movement took on global significance. Thanks to Bruce Jenner’s successful transition into Caitlyn, the world took note of the LGBT movement and the problems that many transgender people sadly face. The release of Director Tom Hooper’s The Danish Girl, therefore, could not have come at a more opportune moment. But does the film grab the moment with both hands? 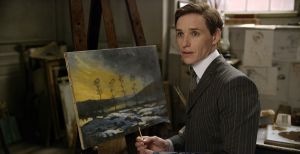 Einar Wegener (Eddie Redmayne), before his transformation, painting a view of his small hometown area.

The Danish Girl is a biopic based on a true story about Einar Wegener (Eddie Redmayne). Einar is a talented artist living with his artist wife, Gerda (Alicia Vikander), in Copenhagen in 1926. One day, Gerda asks Einar to put on women’s shoes and a dress so she can paint him as a woman called Lili Elbe. This awakens another side of Einar. Within five years, Einar decides to be the first known man to undergo transgender surgery.

The Danish Girl begins in engaging fashion. Eddie Redmayne’s and Alicia Vikander’s characters have excellent on-screen chemistry. They enjoy witty, provocative conversations that show how much they are in love with one another. Indeed, the dialogue throughout the first thirty minutes of the film is filled with sexually tantalising lines that will enable audiences to warm to the characters.

However, the rest of the film’s two-hour runtime is not half as engaging. Tom Hooper does not have much story to work with and (unbelievably) it is when Redmayne/Einar starts to cross-dress that the problems with the movie begin. Problem one is that the provocative dialogue comes to an abrupt halt. This means that everything one came to love about the characters ends at once. That the dialogue turns soppy makes one want to cry with despair. (Some of what is said in the film is allegedly true, but it is still awfully slushy. Also, Hooper adjusts the story to suit his ends, so couldn’t he have at least kept the provocative dialogue?) 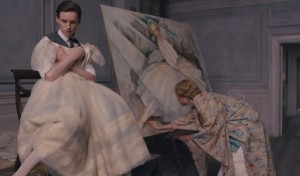 Einar holding a dress as his wife, Gerda (Alicia Vikander), draws him as a woman. Holding the dress, however, awakens Lili.

Problem two with the movie is that Eddie Redmayne starts over-acting. This makes it look like lunacy is taking hold of him; yet, this same over-acting also makes him look noticeably wooden, especially when he transforms into Lili.

And problem three is that Redmayne’s Lili is not a particularly likeable or sympathetic person. She becomes totally self-absorbed, selfish and utterly uncaring for the hurt she causes Gerda, despite having been married to her for many years. Lili’s behaviour has the effect of pushing viewers away from her and the issues she embodies. (Seriously, if a normal man behaved as Lili does, he would be deemed a selfish prick and rightly so; and if a normal woman behaved like that, she would be called a horrible bitch and rightly so. Just because Lili is a transgender person does not exempt her from behaving in a considerate manner.) At a time when the LGBT movement is trying to gain steam to diminish the discrimination and violence that transgender people unfortunately suffer, Lili’s behaviour could be detrimental to the movement’s cause.

Lili’s behaviour also raises another matter unwittingly: the effect that changing gender can have on those whom the transgender person loves. Whether it be a parent or sibling (as was the case for Bruce/Caitlyn Jenner), or a partner (as it was for Gerda), the effects can be emotionally tough, if not crushing. For Gerda, as portrayed in the movie, it is heart-breaking as she loses the man she loves. Alicia Vikander portrays the hurt that Gerda must have felt with raw force. Surprisingly, it is her and Gerda who come out with the most credit from this movie. Thanks to Vikander, Gerda’s pain is real and understandable; whereas Redmayne cannot convincingly convey Lili’s pain, since her emotional pain seems contrived and unnecessary by comparison, like the stroppiness of an adolescent youth.

On the left, Eddie Redmayne’s Lili as seen in the film; and on the right, the real Lili Elbe.

How much one can blame Redmayne for this is debatable. He is, after-all, being directed by Tom Hooper and this is not Hooper’s finest film. Yes, it is shot decently, but the stance the film takes toward Lili is confusing. Is The Danish Girl supposed to be a sympathetic, objective, positive or critical portrayal of Lili (and of transgender people on the whole by extension)? If it is trying to achieve all four, Hooper can claim mediocre success at best and a mediocre mawkish muddle at worst.

Over-all, The Danish Girl is a disappointing film. Alicia Vikander is brilliant and the movie starts off in promising fashion with exceptional dialogue. But before long, the film loses its way and turns into a pitiful sop story; one that is enough to test the patience of even the most tolerant of viewers.

Central to the testing nature of the film is the titular Danish girl, herself: Lili Elbe. She might have been the first man to undergo transgender surgery and she might be a pioneer for the LGBT movement today. But she was neither a nice nor considerate person in real life. It can only be hoped that most transgender people are not like her. Otherwise, the momentum that Caitlyn Jenner and the LGBT movement have gathered over the last year will be undone and smothered for a generation.

Posted in Based on Real Events, biopic