Films based on video games have not been well received, historically. Super Mario Bros, House of the Dead and BloodRayne were atrocious; Street Fighter was rubbish, even if it had moments of unintentional hilarity; while Warcraft was bad, but tolerable mainly due to the visuals. This raises two questions: one, can video games be successfully adapted into movies? And, two, could Justin Kurzel, reuniting with his Macbeth co-stars Michael Fassbender and Marion Cotillard, buck the trend of bad video game adaptations with Assassin’s Creed?

Assassin’s Creed is based on the video game franchise of the same name. The film goes back and forth between fifteenth-century Spain and the present day. Cal (Michael Fassbender) is a descendent of Aguilar de Nerha, an assassin in 1492. He is recruited by a scientist, called Sofia (Marion Cotillard), who needs him to go into a machine and become his ancestor. That way, they can discover what happened to the Apple of Eden. For the Apple was the source of sin in the world and, with it, Sofia and her father, Rikkin (Jeremy Irons), can rid the world of evil. The only problem is that the Knight’s Templars stand in their way…

Assassin’s Creed has a lot going for it. The CGI is very good. Justin Kurzel has done his homework with regards to what Spanish cities looked like in 1492, so the art and architecture are fantastic. Michael Fassbender puts in an admirable, physically-demanding performance that Jason Bourne would be proud of. And the film is full of fight scenes and action sequences that are well choreographed.

Yet, for all the above, Assassin’s Creed is boring and head-bangingly silly. The storyline makes no sense (not that it was ever meant to) and the movie has a superfluous amount of overly long (and amateurishly sped up) fight scenes. Indeed, the film has so much action, one wonders if the fleeting bits of (incoherent) dialogue are sprinkled in here and there to give viewers respite before the next action sequence begins. 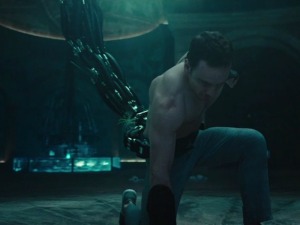 Cal in the machine that connects him to his ancestor, Aguilar.

Furthermore, the performances of Marion Cotillard and Jeremy Irons leave a lot to be desired and both deserve their Golden Raspberry nominations. Cotillard, at least, looks like she is trying (at times), only to be let down by the nonsensical script. Irons, on the other hand, is just going through the motions. His laziness is on a par with Liam Neeson in Battleship, which means Irons is in Assassin’s Creed solely to pick up the cheque and visit some historic locations while he’s at it. (Come on, Irons, you can do better than this. You have won an Oscar, voiced Scar with banal menace, and earned yourself a golden globe nomination for your portrayal of Pope Alexander VI as recently as 2012. Put in some effort for heaven’s sake.)

Nevertheless, as bad as Irons’ acting is, Jed Kurzel’s music is worse. God knows why, but he decided against using Assassin’s Creed’s awesome video game theme tune for the film. (Seriously, it is so awesome DB Weisz and David Benioff used it as background music for the second trailer for Game of Thrones, Season Five.) No, instead, Jed Kurzel has written an awful score that is so loud it cannot be heard and gives one a thumping headache. Plus, what was Jed Kurzel thinking when he decided to use loud, electric guitars to be at the heart of his score for the Medieval/Renaissance Spain scenes? It simply does not work! 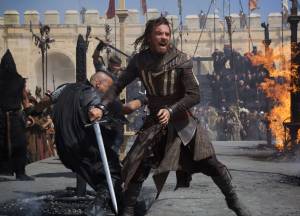 Aguilar the Assassin fighting men of the Knight’s Templar.

Over-all, Assassin’s Creed is a shambles of a film, but it is not an atrocity to cinema. Sure, it is dull; the script and the dialogue are incomprehensible; some of the acting reeks of a disinterest; and the music is horrible. But the movie also has several positive elements, such as the CGI, cinematography and Michael Fassbender’s acting. These give the film cre(e)dence and make it marginally watchable.

Posted in Action, based on a video game

Amelia (Essie Davis) with her son, Samuel (Noah Wiseman), looking under the bed to make sure that no monsters are there.

The Babadook is a low-budget Australian movie. Amelia (Essie Davis) is a nurse/carer in an old people’s home by day and a single mother the rest of the time. Her son, Samuel (Noah Wiseman), is a difficult child who believes to the point of obsession that he sees a monster (the Babadook) in the closet. He creates improvised weapons to deal with the monster when the correct moment arises. At first, Amelia believes that Samuel’s unusually obsessive behaviour is not an in issue. But soon she realises, to her consternation, that a sinister presence might be lurking in the house…

The Babadook is a brilliant horror film that is sincerely scary. At its core, the movie is about a supernatural being haunting a house in need of renovation. But, amazingly, the movie does not fall into the current horror genre trope of quiet, quiet, quiet, quiet… BANG to quicken one’s heart rate. Instead, in a similar vein to The Shining and We Need To Talk About Kevin, The Babadook messes with one’s instincts and emotions in a very natural and unsettling way.

Amelia reading Sam a book to help him go to sleep. Only, without realising it, she is reading to him the poetry book written by the Babadook.

The director, Jennifer Kent, does this by four means: one, through the use of discomforting poetry; two, through the use of ethereal sounds like thud, dook and the crawl of insects to build tension; three, by creating a situation whereby a mother is as fearful for her child as she is fearful of her child (and his disturbing behaviour); and, four, by inflection by making both the mother and the son, in different ways, look more and more like the Babadook as the film goes on. All four of these factors are executed exceptionally well and ensure that one feels a knot gradually tightening in their stomachs.

Undoubtedly, one would not be able to feel this way if the two lead actors, Essie Davis and Noah Wiseman, had not put in such strong performances. Yet, at the same time, both actors have been privileged with richly complex, three-dimensional characters. For this, one must applaud Jennifer Kent for writing such believable characters and a brilliantly written script in general.

A page from the Babadook’s actual book. The poetry is as fantastic as it is unsettling.

Nevertheless, the script (sadly) does not hold out for the whole of The Babadook’s 94 minutes. Arguably, the climactic scene near the end of the movie veers away from the direction that the film had seemed to be going down for more than three quarters of the film. This is a shame as the scenes near the end feel a little jarring and out of sync with the rest of the movie. In addition, the special effects look amateurish at times, which may undermine the scare element of the film. However, one should not put too much stress on these flaws because that would be to take away what is a delightfully accomplished horror film.

Over-all, The Babadook is a superb and genuinely scary horror movie. As a whole, the film is well-written, superbly acted, and deeply unsettling in a very normal way despite the supernatural element within the film. One might nitpick and say that the special effects are not great. Yet, at a time when the horror genre has become a laughing stock, Jennifer Kent demonstrates with The Babadook that there is more to the horror genre than the base (and boring) denominator of quiet, quiet, quiet… BANG, and that horror films still have the potential to scare people.