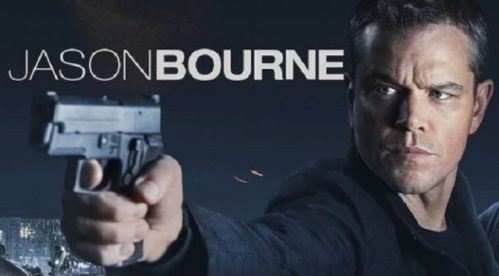 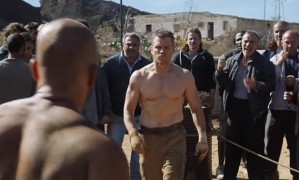 Jason Bourne (Matt Damon), having gone into hiding from the CIA, fights in (quasi-legal) bare-knuckle duels to make a living.

Now, nine years after Matt Damon last played the role, Jason Bourne is back in (the unimaginatively-titled) Jason Bourne. But after having found out (seemingly) all there was to know about his past, what new information could he learn? And, more importantly, does it make for worthwhile viewing?

Jason Bourne begins with Nicky Parsons (Julia Styles) hacking into the CIA and stealing files about Treadstone, the top secret project that Jason Bourne was part of when he first joined the CIA. Whilst hacking, Nicky finds out that Jason’s father, Richard, had a role in Treadstone. So, she goes to Athens and finds Bourne doing quasi-legal bareknuckle fighting for cash.

However, no sooner does Nicky tell Bourne that she has information about his father, the CIA are after them. Bourne now has to evade the CIA once more. Yet, at the same time, he must chase down the necessary people in the CIA who can answer questions about his father.

Jason Bourne is a typical Bourne film, just updated by the touching upon of how Wikileaks founder, Edward Snowden, and data-storing internet companies affect the workings of the CIA. Otherwise, the film has high-octane chases; some good chase sequences, the first of which is particularly well put together, occurring during an anti-austerity riot in Athens; some close-up, shaky-cam fight sequences; and several unexplained plot contrivances. All of which makes for fun viewing.

Yet, apart from that, there really is not much to Jason Bourne. If anything, this is a step-down from the standards previously set by the first three Bourne films. The directing and editing are awful. Part of the appeal of the original Bourne films was that the camera was so close, shaking and sufficiently cut that one felt like they were part of the fights. That happens again here and it is all right. But it is not all right for the camera to shake when there is no fight going on (seriously Paul Greengrass, invest in a tripod) or to cut fight/action scenes every second or so, as it makes one sick.

Also, viewers learn little we did not already know about the eponymous character… other than that Bourne is a doubly super-assassin. It is amazing (staggering in fact) that Bourne is still able to stay three steps ahead of his former masters, despite being out of the game for nine years. He has always been too good and too intelligent for his masters, but this time it is past the point of credulity since he has not been trained to understand and tackle the technology he is up against now. But, no, he understands how to use it and manipulate it just fine.

Perhaps, that is why all the cast look so unenthused. Matt Damon says little, but looks the part: tough and mean (then again, this could be Damon’s grumpy face at the prospect of facing another day of shooting). Alicia Vikander, for the first time in her stellar career, is badly miscast and unconvincing as the ambitious head of the cyber operations of the CIA. Her character’s motives are never clearly explained, which is half of the problem. The other half is that Vikander looks too young for her character’s role, and her character is too weak to be in the position Greengrass has put her in; especially, when compared to the similar role (and apt) Joan Allen played in Bourne II-IV. 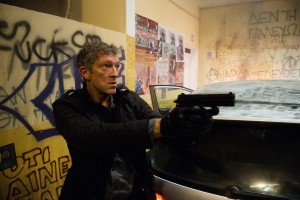 The Asset (Vincent Cassel) trying to keep up with Bourne.

The other characters of note in Jason Bourne are played by a grizzled, weather-worn Tommy Lee Jones (coming from nowhere to be the senior CIA man) and a scary, super-assassin played by Vincent Cassel (who is called The Asset. Yes, Greengrass and the other writers are so creatively bankrupt that they failed to give Cassel’s character a proper name or at least a fear-inducing codename.) Neither Jones’ nor Cassel’s performances are memorable, and (embarrassingly) Brian Cox and Karl Urban, respectively, played the exact same roles as they do in The Bourne Supremacy. As a result, one has a terrible sense of déjà vu watching Jason Bourne, and not in a good way.

All-in-all, Jason Bourne is an entertaining film, if an unnecessary addition to the Bourne series. The movie contains the standard tropes that audiences enjoy, plus Matt Damon is back. But the film adds nothing new to the franchise, and from the directing, to the acting, to the plot, to the general lack of imagination in the film, one cannot help but note that the movie is riddled with problems. What’s worse is that so much of Jason Bourne has been copied from other Bourne films. And there is no worse an insult to a sequel than for it to be deemed a poor imitation of its predecessors.

Posted in Action, Book based, Thriller