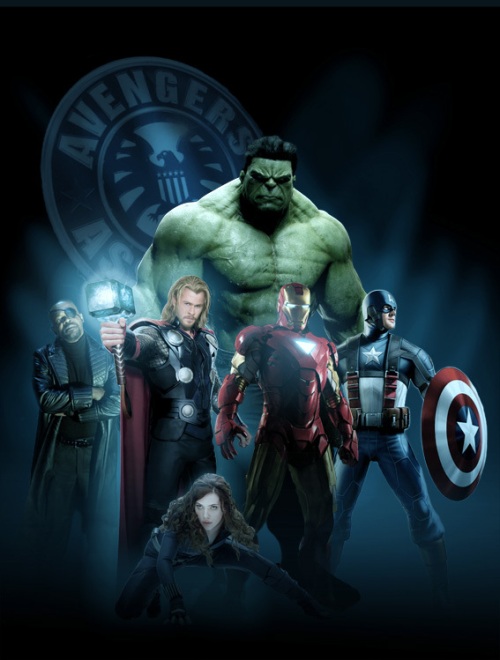 The Hulk, Iron Man I & II, Thor and Captain America: The First Avenger were all made to ready audiences for The Avengers Assemble, the culmination of Marvel’s superhero comic-books turned movies. But could throwing together a bunch of supernaturally-gifted souls work in practice? The Avengers Assemble demonstrates the folly of those who doubted the project.

Nick Fury (Samuel L. Jackson) at SHIELD, puts the Avengers Initiative into motion to save (or avenge) the world from Loki.

The film kicks off with Loki (Tom Hiddleston – Thor, Midnight In Paris, Black Wings Has My Angel) opening up a portal to Earth. After seizing control of the minds of Clint Barton/Hawkeye (Jeremy Renner – The Town, Mission Impossible IV, Mission: Impossible V) and the scientist Erik Selvig (Stellen Skarsgard – Angels & Demons, Thor, Romeo & Juliet), Loki steals the Tesseract, the translucent and supernaturally-powerful cube that belongs to King Odin of Asgard.

Despite their differences, the group must co-operate in order to defeat the onslaught upon Earth that Loki shall unleash with the power of the Tesseract behind him.

The villain, Loki (Tom Hiddleston), smirking as he tells Nick Fury that nothing can stop his plans from coming to fruition.

There is nothing remotely complex, original or realistic about the storyline for The Avenger’s Assemble. Nevertheless, it is greatly entertaining. It has plenty of action scenes and an amusing clash of egos (of Godly proportion) between Thor and Iron Man.

Without being a comedy, the film is littered with banter and jokes. This is because (thankfully), like in This Means War, none of the actors in The Avengers Assemble take their roles earnestly. Bruce Banner and Tony Stark would have looked utterly preposterous if they had tried to seriously discuss astrophysics before turning into a green beast or donning an iron costume.

The Hulk and Iron Man might be the most dominant characters in the film, but director Joss Whedon gives each member of the cast a chance to shine. He gives them all a back story as well. This does not mean that the protagonists in The Avengers Assemble are any less divorced from the society that they have promised to defend; and nor does it mean that they have the depth of the Bruce Wayne of Christopher Nolan’s Batman trilogy or some of the mutants in X-Men: First Class, such as Charles Xavier, Erik Lehnsherr and Raven. Yet, it ensures that Whedon’s comic-book heroes are not mere kick-busters in ludicrous outfits either.

The Avengers in action. Captain America, the all-American hero wearing the stars and stripes, leads the group as they attempt to defend the world from the metal monsters coming from outer-space.

Irrespective, though, of whether the narcissistic Tony Stark has come to like his assistant, Pepper Potts (Gwyneth Paltrow – Iron Man I-III, Contagion, Thanks For Sharing), as much as he likes himself, or if Bruce Banner explains the injustices that have led to him turning into a green monster when he gets angry, the special effects are consistently brilliant throughout The Avengers Assemble. Again, there is little new to behold (the highly destructive flying caterpillars have become standard among alien invasion movies since last year’s Transformers III), but the effects assist the action scenes remarkably well. Even the 3D works a treat!

Over-all, The Avengers Assemble is a thoroughly entertaining and humorous movie. It has an affable group of protagonists, who all seem to have great chemistry on set, plus fantastic fighting scenes and superb special effects. The film might not be original or complex, and it certainly has no deep moral message. Yet, The Avengers Assemble is everything that a light-hearted, comic-book, superhero movie should be. Bring on the sequel!