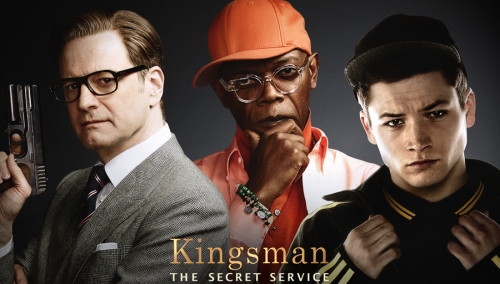 Matthew Vaughn and Jane Goldman make an awesome screen-writing couple. Together, they wrote the hilarious Kick-Ass and the first-rate reboot of the X-Men franchise. Now, they are back in comical fashion with the secret service spoof, Kingsman: The Secret Service.

Kingsman is based on the comic-book by Mark Millar. It is about a young man from South London called Eggsy (Taron Egerton), who is descending into a life of violence, drink, drugs and crime when secret agent Harry (Colin Firth) pays him an unexpected visit. Harry offers him the chance, which Eggsy accepts, to train and become a secret agent/Kingsman to stop Valentine (Samuel L Jackson) from making the world anew with his new invention.

Kingsman is a stylish and entertaining film. At its core, the movie is a satire on the spy thriller genre and James Bond in particular (which, itself, was a satire on the world of espionage until Daniel Craig’s Bond hijacked the franchise). Yet, Kingsman has a (charming) stick-two-fingers-up attitude that most spy thrillers and James Bond films would never dare employ. This attitude has a strangely endearing quality and hints at why Vaughn turned down directing X-Men: Days of Future Past in favour of making Kingsman. This attitude not only makes the film worthwhile-viewing, it reminds audiences of why they loved Kick-Ass so much back in 2010.

Roxy (Sophie Cookson), the obligatory babe, trying her luck to become a Kings(wo)man.

It also helps that Kingsman is ludicrously funny. Vaughn and Goldman have an impeccable understanding of the most essential ingredient for comedy: timing. As a result, the numerous jokes, touché lines, exaggerated action sequences, and amusing special effects all work throughout the film’s 129-minute running time. Indeed, one is likely to be so amused by the ridiculousness of the movie that one is unlikely to care that the plot is cliché and overblown, or that the actors take themselves as disingenuously as their counterparts did in Knight and Day, Mission: Impossible IV and This Means War.

No-one epitomises the preposterous nature of the storyline and the acting as much as Samuel L Jackson (SLJ), as the camp, 1980s-dressed, lisp-impaired villain of the film (named Valentine to cap it all). When one is used to watching SLJ as the stern and authoritative Coach Carter and Nick Fury, one has to blink repeatedly (and with disbelief) to remember that Valentine is the same man. But credit to SLJ: he performs insincerely admirably as Valentine without disgracing himself. The same can be said for Colin Firth, Michael Caine, Mark Strong, Taron Egerton and Sophie Cookson, even if their roles are far less humiliating than SLJ’s.

Over-all, Kingsman: The Secret Service is an enjoyable film, provided it is taken with a handful of salt. The movie is absurd and over-the-top in all departments. But it is a very funny and entertaining spoof on James Bond and the spy genre in general. Thus, like with Kick-Ass and X-Men: First Class before, Matthew Vaughn and Jane Goldman have scored again with Kingsman, and long may they keep scoring.