What is the role of secret agents, and in particular, James Bond in the current era? Sir Ian Fleming, the author of the Bond novels, wrote Casino Royale in 1952. That was at the height of the Cold War between the USA and the USSR, when espionage involving personnel was at its zenith. But in 2015, the USSR no longer exists and espionage involving personnel has been downgraded due to technology. So, again, what is the role secret agents/James Bond nowadays? Spectre, Bond’s 24th outing, deals with this question in typical Bond fashion.

James Bond (Daniel Craig), looking worn and tired after an eventful trip to Mexico, gets a dressing down from M (Ralph Fiennes) upon his return to London.

Spectre opens up in Mexico City, wherein James Bond (Daniel Craig) acquires a ring bearing an octopus insignia. Upon returning to London, M (Ralph) demands that Bond explain what he was doing in Mexico. Bond refuses to explain, which leads to M indefinitely taking him off duty as a secret agent. Upon returning home, Bond re-watches a recording from his former superior, reminding him about a mysterious organisation called ‘Spectre.’ Despite having been removed from duty, Bond leaves London to unearth more about this shadowy organisation.

Meanwhile, in London, M:I-6 has a new intelligence officer, C (Andrew Scott). C has his own plans to take M:I-6 forward; one of which is to dismantle the ‘00’ programme, putting him on a collision course with M.

Spectre, in many ways, is an archetypal Bond movie. Does it have a spectacular opening sequence? Yes. Is there a trademark song afterward it? Yes. Does Spectre have some witty (touché) dialogue? Yes. Does the film have a glamorous-looking cast along with breath-taking locations? Yes. Does the movie have some brilliant stunts, action sequences, and cool explosions? Yes. Does it have a weak storyline in which viewers have to suspend their disbelief to go through with it, without laughing at it? Absolutely! Therefore, Spectre delivers on its (formulaic) expectations for a Bond movie.

However, in two ways, Spectre differs from most other Bond films. One, it makes enough references to other Bond films for it to be an homage to the Bond franchise; particularly, to those of the Craig era. And, two, Spectre is conspicuously slow-burning. Bond films tend to be fast-paced and filled with action to keep viewers interested during the supposedly less interesting parts of the film i.e. when Bond travels from one dazzling place to another, to find out information for the mission. Yet, at 150-minutes, Spectre has so much (often pointless) travelling that even the action sequences cannot keep viewers interested. In short, the movie needed to be cut by 30-45 minutes, especially during the middle hour where little happens. But because it has not been edited sufficiently, Spectre borders on boring at times, which is very unlike a Bond film.

Nevertheless, during these ‘boring’ parts, one gets to explore a different (vulnerable?) side of Bond’s character; notably, whether James Bond actually enjoys being James Bond. Not only is this elucidated adeptly, but due to Daniel Craig’s aging appearance it seems entirely apt to have these questions raised. Indeed, Craig looks old and worn in Spectre, as if the strain of being Bond has taken its toll on him. Still, he is marvellous, tough and wryly humorous as Bond; probably more so than in Skyfall.

Likewise, Ben Whishaw is a joy to watch as the funny and smart Q, as is Christolph Waltz as the mysterious, villainous Oberhauser; and as is Ralph Fiennes as the serious M. Léa Seydoux plays quite well, too, as Bond’s temperamental love-interest, Dr Madeleine Swann. Surprisingly, she has been given considerable character depth for a Bond Girl. Seydoux may lack chemistry with Craig on screen, but her character often drives Bond and the plot forward in interesting ways.

Bond’s cunning nemesis, Oberhauser (Christoph Waltz), the shadowy figure at the head of a clandestine organisation, known as ‘Spectre.’

Between her and Bond, and M and C), Spectre tries to intellectually tackle important questions that have become extremely relevant to Western politics since 9/11. Fascinatingly, the movie discusses the role of secret agents and technology, hinting at how times have changed since the Cold War; and how much power spy organisations should be given regarding the surveillance of ordinary citizens. Granted, Spectre only tackles these questions on superficial levels (and with answers that one could have guessed from a Bond film). But at least the movie brings up these questions. They also add a layer of depth to the storyline, which is always welcome.

Over-all, Spectre is an all right James Bond movie. It is quite long, but fun and entertaining in ways that are reminiscent of so many other, previous films in the franchise. Nonetheless, Spectre differentiates itself from other Bond films by winking at fans with self-reference; by giving Bond and the other characters some depth; and, most notably, by trying to address complex issues that have plagued Western governments since the turn of the 21st-century. Spectre makes some valid arguments on the role of spies, technology, and the extent to which security organisations should be permitted to use surveillance in the current era. All of which enrich the Bond experience and will leave audiences thinking about them after the film has ended.

Posted in Action, Book based, Thriller

2011’s The Inbetweeners Movie was a phenomenal success both narratively and at the box office. On the back of the hilarious TV series audiences, with delight, followed their four favourite misfits on holiday in Greece. But the 2011 film was supposed to be a last stand for the cast. A sequel had not been intended at the outset and, to some extent, this is to the detriment of The Inbetweeners II. 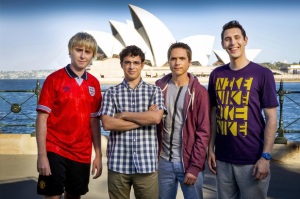 Jay (James Buckley), Will (Simon Bird), Simon (Joe Thomas) and Neil (Blake Harrison posing in front of Sydney Harbour to prove that they actually did go to Australia.

The Inbetweeners II revolves round the four losers known as Will (Simon Bird), Simon (Joe Thomas), Neil (Blake Harrison) and Jay (James Buckley). Will and Simon are at university, while Neil is doing the odd job here and there. Jay, however, has taken some time out and has gone to Australia for a gap year. After reading a message from the teller of tall tales himself, Will, Simon and Neil decide to visit Jay to see for themselves how great Jay’s life is going down under.

The Inbetweeners II is a funny film. Its humour might be juvenile, crude and vulgar (not to mention misogynistic); yet, the movie delivers on its promise to make viewers laugh regularly and often. Like the TV series and the 2011 movie, the script has been superbly written and the four main losers have great chemistry between them. Arguably, the best parts of The Inbetweeners II are when the four of them are together in a car or walking around talking because, in more ways than one, viewers know people with similar characteristics to them (which is what made the TV series and the first film so amusing).

Will meets Kate (Emily Berrington), an old classmate of his from primary school, and immediately (and unsurprisingly) takes a liking to her.

However, watching the four loners make the same (hackneyed) jokes outside their small (crappy) town somehow dilutes the jokes’ effects. In the same way that one cannot take Hogwarts out of a Harry Potter film and expect the movie to have the same magical effect on audiences (Harry Potter VII(i)), one cannot take the inbetweeners out of their unique setting as half the gags no longer work.

Additionally, narratively, The Inbetweeners II runs out of gas between two-thirds and three quarters of the way through movie. Symbolically, this happens when Jay’s car runs out of petrol in the middle of nowhere. Yet, by that point old jokes have been rehashed, and the directors have cranked up many of the other jokes to eleven in the (forlorn) belief that making something louder and cruder equals funnier (which is always the sign of desperation and the exhaustion of ideas).

Simon’s girlfriend, Lucy (Tamla Kari), who has turned psychotic since the last film for… reasons.

Worse, the sequel does not develop the four oddballs. This entails that we don’t learn anything new about them and that they have not changed or grown up. This is disappointing as there have been events that have happened off-screen to the boys since the last film and some of these must have had consequences on their personalities. But, no: little of these events are divulged on screen and the corollaries of these events even less so to the disadvantage of the film and the Inbetweeners phenomena itself.

All-in-all, The Inbetweeners II is a highly amusing film. The humour may have plunged to shamefully depraved levels, but it will still have audiences laughing more often than not. Nevertheless, one cannot help but feel that the directors did not plan for this sequel and only green lit it upon the success of the 2011 movie. Whether it is the storyline; the direction of the film and the characters; or even the jokes themselves, The Inbetweeners II goes flat long before the end. Interestingly, in a recent interview, the directors said that they were ‘killing’ the Inbetweeners with this film and that this was to be the boys’ last outing. It would be no surprise if the directors get their wish this time.

Posted in Comedy, TV series based