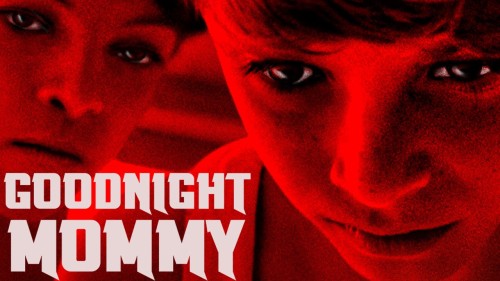 Since the turn of the century, the horror genre has been dominated by the ‘found-footage’ and the paranormal subgenres. Seemingly, film-makers have often forgotten how to make horror films devoid of hand held cameras and/or ghosts going boo to scare audiences, with a couple notable exceptions (The Babadook and The Gift). Well, like those two exceptions, the Austrian film Goodnight Mommy gives viewers a different type of horror film.

The modern, art-deco Austrian countryside, next to a lake, a cornfield and a forest. How could something so tranquil feel so ominous?

Goodnight Mommy is about nine-year-old twins, Elias and Lukas (Elias and Lukas Schwarz) and their mother (Susanne Wuest), who are on summer holiday in their modern, country retreat in the Austrian countryside. The twin’s mother has had some cosmetic surgery done to her face and wears bandages to conceal all but her eyes.

However, she starts to act in strange and increasingly erratic ways. Apparently, she was never like this before and the twins begin to suspect that this woman may not be their mother at all…

Goodnight Mommy is a horror film in the true sense. It is enigmatic, thought-provoking, violent and tense, sucking viewers deeper and deeper into the odd circumstances surrounding the three main characters. Some kind of trauma has happened, that is obvious. But what is it? Where is the father? And why does the mother only speak to Elias and not to Lukas?

The film has an art-house feel to it since it does not rely on jump scares (i.e. quiet, quiet, quiet, quiet, BANG!) to frighten audiences. Rather, Goodnight Mommy relies on silence, atmosphere and the elements to create a genuinely tense and unnerving experience for the entirety of its 100-minute running time. Never has a kid turning on a tap or a mother munching on a biscuit been so quiver-inducing before. It is quite astonishing that the directors, Severin Fiala and Veronika Franz, manage to maintain this level of terror and tension when so little happens for much of the movie. 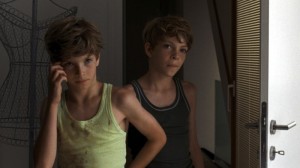 The dorable twins, Elias and Lukas, entering into their mother’s room… where they shouldn’t be entering.

Central to their success is the setting. The remoteness of the countryside retreat, with its lake, forest and corn fields gives the film a naturally ominous feel. The weird, hazy pictures of the mother that adorn the walls in the house add creepiness to the already ominous setting. It must also be noted that film has been shot in 35mm camera and with stunning precision, capturing the gorgeously haunting nature of the location.

Nevertheless, Goodnight Mommy could have gone the same way as It Follows had it not been for the strong performances by the three main cast members. The mother, played with wonderful sincerity by Susanne Wuest, comes across as strict, strange, cold and vulnerable all at once, with a regal blue-eyed glare to give her petrifying edge. In contrast, the twins come across as normal, active cherubs who are always playing together, while being forced to live under the pressure of their OCD, disciplinarian mother.

However, aspects of the twin’s behaviour are enough to raise brows. This makes viewers question whether there is more to them than meets the eye. Whenever one sees twins in horror films, one is subconsciously reminded of the creepy twins in The Shining, and that raises further suspicions about Elias and Lukas here. That Goodnight Mommy has (unfair) comparisons with Michael Haneke’s Funny Games (due to both being Austrian horror films) ensures that viewers are constantly wondering what the twins are going to do next. And how unsettling it will be when they do. 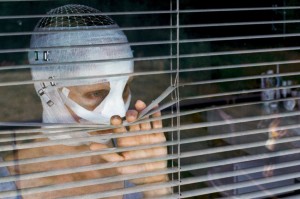 The mother (Susanne Wuest), her face bandaged up, but for her piercing blue eyes, looking outside creepily to see what her sons are up to.

Goodnight Mommy’s ability to keep viewers guessing is part of the film’s appeal and its chief asset. Yet, this also leads to its chief flaws. For one, the opening sequence has no bearing on the rest of the film when it seems like it is a scene from somewhere in the middle of it. This is puzzling. Also, there is a lot of ambiguity within the movie, some which are not properly explained while others are never explained at all. Again this is puzzling.

All-in-all, Goodnight Mommy is a terrific and genuinely scary horror film. The movie employs no jump scares or hand-held footage or phantoms. Rather, it skilfully trusts in its setting and in the circumstances that the three main protagonists find themselves in to induce tension and terror into viewers. The movie is not perfect. But it is unnerving and disturbing. It is also tense, mysterious, violent and psychologically challenging. Thus, Goodnight Mommy is everything that horror film should be and certainly worth a watch.

In the last dozen years, there have been a string of actors who have turned themselves into creditable directors. Sofia Coppola directed Lost in Translation in 2003 (and was nominated for two Oscars for it). While George Clooney directed and starred in The Ides of March in 2011 and Ben Affleck did the same in Argo in 2013 (and won an Oscar for it). Joel Edgerton seems to be the latest actor to try his luck behind the camera, and his directorial debut is a gem. 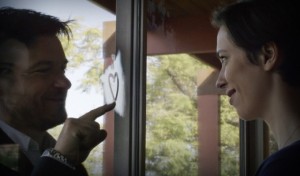 The happy couple. Simon (Jason Bateman) showing affection to his wife, Robyn (Rebecca Hall) whilst convincing her that this is the right house for them to make a home.

Edgerton’s film, The Gift, centres round an ostensibly happy couple, Simon (Jason Bateman) and Robyn (Rebecca Hall). They have just moved from Chicago to suburban Los Angeles because Simon got a new job. One evening, when they are at a shop buying supplies for their new home, they bump into Gordon ‘Gordo’ Moseley (Joel Edgerton). Gordo remembers Simon from their high school days and is keen to become friends with Robyn and Simon. Simon, though, is not so keen since he remembers how much of a weirdo Gordo was back then. (Simon even boasts that he and his peers called Gordo ‘the Weirdo’ back in school because he was so weird.)

Nevertheless, Gordo goes to their new house when Simon is not around and starts giving them gifts, despite neither Robyn nor Simon asking for any. Soon, Gordo’s behaviour begins to trouble Simon and Robyn. It puts a strain on their marriage, especially as Robyn suspects that Simon is not telling her something…

The Gift is a slow-burning psychological thriller. Not a lot happens for much of the film. Yet, it is a tense watch. This is primarily because Director Joel Edgerton (thankfully) does not use loud, sudden noises to artificially inject jump-scares into his viewers. Rather, he uses the natural spookiness of the suburban area to good effect and creates a scenario that nobody would want to experience. The combination induces an organic and ethereal tautness into the audience, thereby making The Gift an uncomfortable watch. 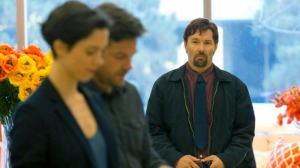 Gordo (Joel Edgerton) staring with unsettling intent at Simon and Robyn at the local supply store.

Central to The Gift being an uncomfortable watch is Edgerton as an actor. Edgerton is really good as the unsettlingly weird Gordo. With just a look (or a gift), he can make viewers feel like ants are crawling under their skin. Edgerton’s/Gordo’s weird behaviour is one of the reasons for this; the other is due to the phenomenal (and subtle) job that the cosmeticians have done to his face. They have transformed Edgerton from a pleasant, amiable-looking guy into someone that no-one would ever want to come across, whether in a supermarket, a social gathering, on the train, or in a dark alley at night. (Especially not in a dark alley at night!)

Edgerton/Gordo is undoubtedly the star of the film. He activates the tension and his behaviour gets unnervingly weirder and weirder the more The Gift goes on. Yet, one cannot ignore the roles played by Rebecca Hall and Jason Bateman either to making the movie tense. Hall plays plausibly well as a woman who seems fine on the surface, but has psychological issues brooding under the surface; while Bateman plays decently as his seemingly usual, (semi-)comic, supercilious self. Nevertheless, neither Hall nor Bateman have the same weight on screen as Edgerton. One spends much of the time when Edgerton is not on screen waiting for him to reappear as one knows that something strange and unsettling is likely to occur.

Edgerton gets a lot right as an actor in The Gift. He also gets a lot right as the director and writer of the film too. He captures the cinematography of a suburban town well (with all its beauty and mundane scariness), and uses relatively long shoots to enable viewers to feel the normality (and tension) of the situation unfolding for Hall’s and Bateman’s characters with impressive skill. 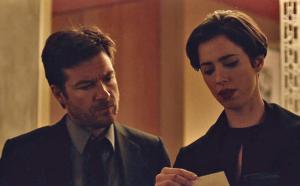 Simon and Rebecca find a gift awaiting them at the house upon returning from some friends. Guess who its from…?

Additionally, Edgerton has written a very good script that has believable dialogue and a solid storyline. It is only in the climactic scene at the very end of the film that one or two elements of the dialogue and script don’t work. Indeed, they seem entirely at odds with the realism of the rest of the movie. But to put too much stress on the (eye-raising nature of the) end would be to do The Gift and Joel Edgerton a disservice. As an actor and as a director, Edgerton emphasises that he has talent akin to Sofia Coppola, George Clooney and Ben Affleck.

Over-all, The Gift is a well-executed psychological thriller. The final scenes may be questionable. But the film is tense and suspenseful in an entirely naturalistic and refreshing way. Undeniably, Edgerton is the shining light of this film as an actor, the writer and the director. He is creepy as the main supporting actor; intelligent in his script-writing; and neat in his directing. Edgerton is highly unlikely to be nominated, let alone win, an Oscar for his directing The Gift. But this is a great directorial debut from him, and one looks forward to watching what he writes and directs next.