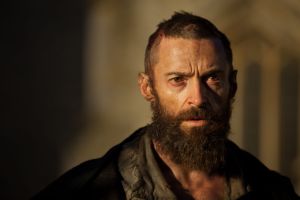 Jean Valjean (Hugh Jackman), looking like a scraggy vagabond, as a convicted criminal about to be released on parole.

The storyline is based upon the 1862 historical-fiction novel by Victor Hugo and the subsequent theatre production. It loosely centres round Jean Valjean (Hugh Jackman) and Javier (Russell Crowe). Jean Valjean is a convicted man, who breaks his parole and seemingly vanishes in his bid to start a new life. Javier, the Inspector, upon discovering what Jean Valjean has done, is determined to find Prisoner 24601 and bring him to justice.

The plot for Les Misérables is more detailed and layered than that, especially as it has a large cast all with roles to play before the story ends. Unlike the stage version, the film does a good job of keeping the narrative understandable and easy to follow, despite having to take out chunks from the book. This is no small achievement, considering that more or less the entire movie is sung. Credit should rightly go to Tom Hooper for this, as well as for successfully turning a theatrical play into an Oscar-nominated film. (It should be borne in mind that The Woman In Black was the last time a director attempted to translate a play into a movie, and the less said about that film the better!)

However, in spite of Hooper cutting out sections of the book, the film still seems too long and somehow bloated at 158 minutes. The Artist, it should be noted, is only 100 minutes and, consequently, does not feel over-stuffed. Part of the reason for why Les Misérables feels this way is due to the numerous sub-plots taking place throughout the story, many of which have only questionable importance to its outcome.

Inspector Javier (Russell Crowe), wearing almost the identical garb of the former (and now fallen) Emperor Napoleon Bonaparte I, on the lookout for Jean Valjean.

Yet, more significantly, does the story actually matter? When one watches Les Misérables in the theatre, one is more likely to be awed by the music and the mechanics of the stage, than taken in by the (slightly contrived) narrative. But the movie does not have an innovatively-devised podium. Additionally, it suffers from a cast that, while stellar in name, generally lack the powerful vocals of their stage counterparts.

Russell ‘wannabe-Napoleon Bonaparte’ Crowe and Hugh Jackman, the two leading men, are particularly guilty of this. It is not that their performances are bad, it is just painfully obvious that they are actors first and singers a distant second. One might argue that this is what Hooper desired as he claimed to want the vocals ‘raw’ and conversational, rather than melodramatic. (Then again, he could have been saying this as a defence of his cast, in hindsight, after realising that he should have used stage actors instead of Crowe and Jackman.)

Also, the more one sees and hears the supporting cast, the more Crowe and Jackman are shown up; in particular, against Anne Hathaway. Hathaway, as Fantine, might look pale and terribly thin with her skin, bone and flesh emaciated a la Natalie Portman in Black Swan, but she most certainly can sing. In Rio I, Hathaway showed that she can sing well and nicely. But in Les Misérables she takes her talents to a new level, acquiring immense vigour in her voice, despite clearly lacking in nourishment.

No-one else looks starved like her, but Eddie Redmayne and Samantha Barks, as the rebel Marius and Éponine, respectively, have very good voices; Amanda Seyfried, as Cosette, illustrates that she’s a better singer than actor (and that she can exist without her incongruous pink lip-gloss, unlike in the medieval-themed Red Riding Hood); while Sacha Baron Cohen and Helena Bonham Carter, as Thénardier and Madame Thénardier, respectively, show us that they may not have noteworthy vocals, but that they can still make us laugh whilst in tune. 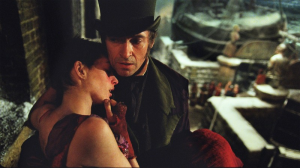 Jean Valjean, now all cleaned up and living a new life under a false name, holding a poorly street-woman, who just so happens to be Fantine (Anne Hathaway).

Yet, if one is truly bothered about the singing not being up to scratch with the stage performers, one can still admire the sceneries and the visuals. Cinema, as opposed to theatre, is not limited by the area of a stage (however impressive the mechanics of it may be), and Hooper uses this to his advantage to give viewers a true feel for the (miserable) neighbourhoods that our characters come from in a way that the theatre perhaps can’t convey as deeply.

All-in-all, Les Misérables is very impressive theatrical production-cum-film. The cast’s vocals may not be as strong as those actors on the stage, and the movie lacks some of the charms of the theatre. Nevertheless, like The Artist, Les Misérables is something different, and it should be celebrated that an operatic-style film can be delivered in such a superb and entertaining manner.

Posted in Ancient & Historical, Based on a Theatre Production, Book based, operatic